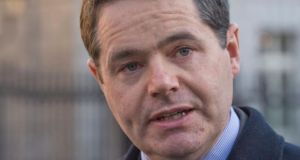 Minister for Finance Paschal Donohoe has signalled he will have a budget day package of €2.8 billion but will borrow more to fund contingency measures to deal with a no-deal Brexit if needed. Photograph: Brenda Fitzsimons

The Economic and Social Research Institute (ESRI) has warned that the Irish economy could fall into recession next year in the event of a disorderly Brexit.

In its most shrill Brexit warning to date, the think tank also indicated that the Government may need to hold a supplementary budget in the early part of 2020 to counteract a major shock from Brexit.

In its latest commentary, it forecast the Irish economy could fall into recession next year, contracting by 1 per cent, if the United Kingdom’s impending divorce from the European Union disrupts business supply chains and results in another major slide in the value of sterling, which hurts exporters here.

Alternatively if Brexit fails to materialise, the Irish economy is likely to keep on growing, by as much as 5 per cent this year and by 3.1 per cent in 2020.

The uncertain international environment posed a major problem for policymakers, the ESRI said.

“The most appropriate budgetary stance may vary significantly depending on the Brexit process,” it said.

“If the domestic economy continues to perform strongly in 2020 then a mildly contractionary budget is advisable to reduce the possibility of overheating,” the ESRI said.

“If the nature of Brexit results in a significant and adverse shock for the domestic economy then a stimulatory budget may be required,” it said.

Minister for Finance Paschal Donohoe has signalled he will have a budget day package of €2.8 billion on October 8th, but will borrow more to fund contingency measures to deal with a no-deal Brexit if needed.

These contingency measures are expected to be used to support at-risk sectors of the economy, such as in the small business, agriculture and tourism sectors. He has, however, so far ruled out the possibility of a supplementary budget.

“One way that you could make the budgetary package more expansionary would be to increase the funds to sectors that are most likely to be impacted,” the ESRI’s Kieran McQuinn said.

“However, if the economy continues to perform into the new year and Brexit is not an issue the Government may need to tighten the budgetary package by reducing expenditure in some shape or form,” he said.

Prof McQuinn said October’s budget is technically only a draft which could be amended later in the year to accommodate a sudden change in circumstances, which gives “the Government some wriggle room”.

8 More than €162m for five retail parks in receivership