‘Hope for the best, prepare for the worst,’ say diplomats, with talks in danger of timing out 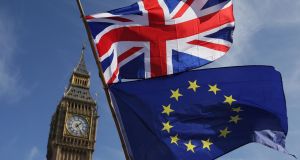 Belgium, France and the Netherlands have called on the European Commission to accelerate contingency planning for the possibility that a Brexit trade deal cannot be struck. Photograph: Daniel Leal-Olivas/AFP via Getty

Belgium, France and the Netherlands have called on the European Commission to accelerate contingency planning for the possibility that a deal cannot be reached in Brexit talks with the UK, after discussions were halted when a negotiator tested positive for Covid-19.

In a move thought to be backed by a majority of member states, the three governments made the appeal as the countries set to be among those most affected by Brexit alongside the Republic, with time running out to clinch a deal and hundreds of billions of euro in trade at stake.

“We can’t keep hoping for a good outcome,” said Belgian prime minister Alexander De Croo, who made the appeal alongside French president Emmanuel Macron and Dutch prime minister Mark Rutte. “There might be one, but hoping alone is not enough. We have to start our contingency planning.”

Mr Rutte told reporters he had “insisted, in parallel with the negotiations, on more clarity from the commission about their proposal about European contingency measures”.

“Hope for the best, prepare for the worst,” an EU diplomat said. “Given the late stage of the negotiation that we’re in and the complexity of the transition ahead, with little more than six weeks left, it seems to be the prudent thing to do.”

The vast majority of the legal text of a deal has been agreed between British and EU negotiators, but the most contentious issues – the level playing field, governance and, especially, fish – have yet to be surmounted. And the risk that an agreement cannot be reached in time is considered to be serious.

Contingency plans would include emergency legislation required to keep trucks moving, planes flying, and energy flowing between the UK and EU if the legal basis for such things abruptly dissolved overnight at the end of the year in the absence of a deal.

The European Commission has been reluctant to move forward with the plans in case it influenced the negotiations, by signalling a lack of confidence in the talks or even making no-deal seem more appealing by smoothing over some of the difficulties.

The EU is keen to reach a durable, permanent legal arrangement with the UK on such issues, rather than risk relying on a patchwork of emergency legislation for a long period.

But with just weeks to go, businesses and industry groups have been piling pressure on governments across Europe for certainty on what will happen on January 1st. This has led to a rise in support for accelerating joint EU contingency measures to avoid individual member states being tempted to reach out to London bilaterally, potentially undermining EU unity in the talks.