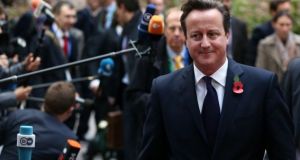 The United Kingdom’s exit from the EU could lead to lower wages and major trade losses for the Republic. Photograph: Carl Court/Getty Images

The United Kingdom’s exit from the European Union could lead to lower wages, higher prices and major trade losses for the Republic, the Economic and Social Research Institute (ESRI) has warned in the most dramatic prediction yet made about the possible consequences.

The stark commentary by the ESRI comes just days before Taoiseach Enda Kenny makes his most high-profile intervention in the so-called Brexit debate, when he addresses top UK business leaders at the Confederation of British Industry (CBI) annual conference on Monday.

In an assessment of the worst-case implications of a “Brexit” on Ireland, the ESRI warns that a British departure from the EU could lead to passport controls at the Border and restrictions on free movement between Britain and Ireland for work.

Trade between the two countries could drop by a fifth, about €10 billion annually, which would particularly hit small Irish-owned exporters.

In his speech, Mr Kenny will tell the CBI, the largest business lobby in the UK, that the UK continues to draw significant benefits from participating in the EU.

As well as arguing that the UK must keep its central place in the EU, the Taoiseach is expected to make clear his belief that the benefits of the single market have never been fully accepted in the UK.

Unlike the decision to keep silent during the Scottish independence referendum, the Irish Government has for months taken an increasingly vocal stand in London circles to underline the argument that the EU is stronger with Britain at its core.

Mr Kenny’s address to the CBI follows publication today of an ESRI report, which says a “Brexit” would have potentially “far-reaching consequences for Ireland”.

While an informed source said the Coalition would take into account the ESRI’s assessment, the source added that ongoing analysis within Government “mightn’t necessarily” concur with the ESRI’s findings.

Ireland and Britain exchange more than €1 billion in goods and services each week and Irish exports to Britain this year are worth more than €1.2 billion a month.

Britain was more important as a source of imports to Ireland than as a destination for exports, said ESRI research professor Edgar Morgenroth.

He also said that a “Brexit could prevent emigration that would otherwise happen” and “could result in a displacement of migrants from Britain to Ireland”.

An ESRI simulation suggested that an additional 60,000 people in the Irish workforce as a result of such developments could result in cuts “near enough to 4 per cent” in average wages.

The wage decline would be steeper for high-skilled people, at almost 5 per cent.

Ireland would have to consider expensive electricity interconnection to France if Britain left the EU, Prof Morgenroth added.

Given Ireland’s dependence on gas supplies from Britain, a “Brexit” could raise questions about energy security, he said.