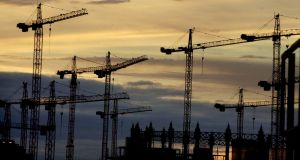 An Bórd Pleanála has received 13 planning applications for developments that could see the construction of up to 4,000 housing units under the Government’s new “fast-track” planning system.

The system was brought in last year to address the current housing crisis. An Bórd Pleanála’s website shows there are currently 10 live applications for residential housing – five in Dublin, two in Galway, two in Kildare and one in Cork. They involve proposals to build a total of 3,988 housing units, comprising 2,244 houses and 1,744 apartments.

The largest proposal awaiting approval is from developer Michael Cotter’s firm Viscount Securities, which has submitted plans for a total of 365 houses and 562 apartments at Clay Farm in Leopardstown in south county Dublin.

Developer Michael O’Flynn is also seeking the go-ahead to build 496 houses and 67 apartments on a 31-hectare site at Ballinglanna, Glanmire in Co Cork.

There are also three separate fast-track planning applications for student accommodation in Dublin and Cork.

The largest one by Cairn Homes is for 576 bedspaces and 103 student apartments at the former Blakes and Esmonde Motors site in Stillorgan, Co Dublin.

A €300 million on-campus accommodation complex at University College Dublin (UCD) was the first development to be formally approved under the new system last week. The university was granted permission for the development, comprising six multistorey blocks with 2,178 bedspaces, in just over three months.

The board is due to make decisions on its fast-track applications at various dates over the next three months with a number of decisions expected in February.

The application processes included a period of public consultation and followed the completion of a pre-application consultation with the planning authority and the relevant local authority.

An Bórd Pleanála confirmed it had dealt with 36 pre-application requests under the new system in recent weeks. Of these, it said 27 were now concluded while nine were ongoing, The concluded applications include the 13 pending applications and the UCD decision. Some of the others may still be re-submitted as final applications. Under the normal rules, Bord Pleanála can deliberate for up to 18 weeks and this period can be extended for various reasons.

The figures indicated a large pick-up in the purchase of new homes by first-time buyers availing of the incentive, which offers tax rebates of up to €20,000.

“This grant made housebuilding for this segment viable again, meaning banks were willing to lend to companies to build suitable houses,” CIF director-general Tom Parlon said.

“The reality of the post-recession economy is that few builders are in a position to fund the large housing developments required to address the housing crisis,” he said.