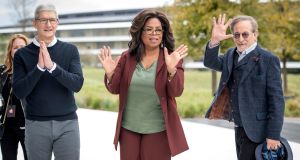 Image of the week: Apple’s Showtime

A change of scene this week for Hollywood A-listers, as they headed north from Los Angeles to Cupertino and the less familiar environs of a tech campus, where the launch of subscription video-on-demand service Apple TV+ was top of a bill.

Chief among billionaires hanging out with Apple boss Tim Cook was Oprah Winfrey, who is doing documentary projects and a book club for the platform, and seems quite excited about it. “They’re in a billion pockets, y’all,” she said. “A billion pockets.”

Steven Spielberg, meanwhile, is bringing back his 1980s anthology series Amazing Stories, the director clearly being a lot keener on Apple than he is on Netflix.

Spielberg recently became the voice of “old Hollywood”, clashing with the streamer over whether films not shown in cinemas should qualify for the Oscars – he thinks they’re more Emmy material. Of course, no one’s actually seen a second of anything Apple has paid for just yet.

55 Percentage of the UK public that would vote to remain in the EU if there was to be an exact repeat of the 2016 referendum, according to a new British Social Attitudes Survey.

35 Percentage of the UK public that would vote to leave, according to the same poll from the UK’s National Centre for Social Research, suggesting something of a drop from the 52 per cent that voted to leave in June 2016.

10 Percentage of people who said they would not vote, this lucky group apparently not having the will or inclination to either stop the madness or commit to it.

Getting to know: Christina Koch and Anne McClain

Christina Koch and Anne McClain are two astronauts currently working off-planet on the International Space Station (ISS) and this Friday they had been scheduled to be participating in the first all-female spacewalk. Those batteries aren’t going to install themselves. Alas, US space agency Nasa has had to adjust its line-up because of a wardrobe issue.

McClain did a spacewalk last week in a large-fit spacesuit, but has decided as a result of this experience that a medium-sized torso would be better. Alas, although there were two medium suits on board, only one was ready to go in time for Friday and it’s going to be worn by Koch, who will now do her first spacewalk with a male replacement for McClain. Oh well. The story has brought new attention on the fact that Nasa is running out of spacesuits generally. Maybe time to stock up on some new outerwear?

The robots are coming. Still. They’ve been coming for a while now, to be fair. They’re taking their time. Some might say – given the rise of highly visible automation in supermarkets and fast-food restaurants – that the advance party is already here. But which are the least at-risk occupations? The UK’s Office for National Statistics (ONS) has done some human computing.

1. Medical practitioners There may be huge potential for automation in the care sector, but Doctor Robot won’t be seeing you anytime soon.

3. Senior education professionals Why it’s almost as if education is too important and skilled a profession to be automated.

5. Dentists Absolutely no one wants a robot malfunctioning on them when they’re in the chair.