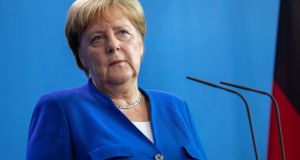 Germany had a black Christmas in 2008. Three months after the collapse of Lehman Brothers, triggering the global financial crisis, the Bundesbank warned Germans to prepare for the worst. The country was facing a slump of 0.8 per cent, the Frankfurt central bank forecast, one of its worst economic declines since the 0.9 per cent slump during the 1975 oil crisis.

A decade on, there is a whiff of deja vu in Germany over the central bank’s latest warning of looming recession in Europe’s largest economy. After a bumper decade, while its neighbours struggled with the euro crisis, Germany’s golden run of the Merkel era may be at an end. Following economic decline in the previous quarter, the Bundesbank suggested Germany’s “total economic performance could once more retreat slightly” in the current quarter.

Consumer spending remained strong but was not enough to cushion weakening production in the industrial sector and keep Germany from a “longer period of negative growth”.

“Future developments will hinge on how long the present economic dichotomy lasts and which direction it takes once it dissolves,” it wrote in its monthly report. “As things currently stand, it is unclear whether exports and, by extension, industry will regain their footing before the domestic economy becomes more severely affected.”

The grim Bundesbank forecast followed a warning, on Wednesday of last week, from Germany’s federal statistics office that the country was most likely already in its second consecutive quarter of negative growth – a technical recession – after data showed the economy shrank by 0.1 per cent between April and June.

Germany narrowly avoided a recession last year but may not be so lucky now. The Zew survey of financial market experts showed economic sentiment had dropped much further than analysts expected in August to minus 44.1, its lowest reading since the euro crisis of 2011.

Amid the gloom, chancellor Angela Merkel insisted: “I see no necessity for an economic stimulus package at the moment.”

For financial markets that sounded like an echo of a decade-old refrain. During the autumn of 2008 the chancellor – buoyed by the positive economic wave unleashed by her predecessor’s reforms – seemed unsure how to react to the building storm.

Eventually, after the accusations of hand-sitting became too loud to ignore, her government agreed an unprecedented economic stimulus package.

Chief among the measures was retooling the so-called Kurzarbeit (short-time) legislation, allowing companies to cut employees’ hours with the state stepping in to cover up to 67 per cent of the workers’ lost net income.

That measure alone cost €5 billion, involved 1.4 million employees – mostly in the manufacturing and auto industries – and, according to the OECD, saved about 500,000 jobs and helped German companies and the economy bounce back in 2010.

With recession bells ringing again, Kurzarbeit is once more on the horizon. Schaeffler, the automotive industry supplier, has announced that 400 people are to enter short-time arrangements from September “until further notice”. Other firms are already there: Trevira, which produces materials used by car companies in their upholstery, has already moved nearly half of its 1,100 employees into short-time mode.

What was sold in May as a short-term measure until July has now been extended indefinitely.

Similar remarks can be heard from the car industry and its supplier: Volkswagen has announced short-time for workers in the eastern city of Zwickau, while chip and glass manufacturers have followed.

Munich’s Ifo economic institute suggests the manufacturing industry woes are starting to spread into other sectors of the German economy, with no end in sight to the inherent weakness in outlook.

Some 8.5 per cent of firms surveyed by the Ifo say they are expecting to tap the short-time funding pot in the near future – the highest value since 2013. Last year just 2.6 per cent felt this would be necessary.

The Ifo says Germany’s crucial industrial sector has effectively been in recession since the middle of 2018. Leading the way, with a slowdown of 30 per cent, are vehicle builders – from ships to tanks – followed by textiles, leather, rubber and plastic components.

At this stage, many still hope the downturn is a brief dent in Germany growth – and can be foreshortened by short-time and other arrangements.

For Ifo economist Robert Lehmann, short-term working “is the tool of choice if companies want to hold onto their skilled workers despite economically difficult times”.

But short-time rules are of limited help if a major slowdown is coming.

Germany has traditionally relied on selling abroad its manufactured products, such as cars and machines. This strength in times of economic growth has always been an achilles heel in global slumps.

Adding to the pressure now is a US administration that is fond of protectionist rhetoric and is ramping up trade tensions with China and the EU. Donald Trump’s threats of extra tariffs on European-made cars would hit the likes of BMW, VW and Daimler hard – even with their US-based plants.

Add ongoing dieselgate uncertainties for German carmakers – and unpredictable Brexit shocks – and some German economic analysts are gloomier than others.

Berlin’s DIW economic institute head Marcel Fratzscher suggested Germany was “already in a technical recession because the third quarter is developing in a weak fashion”.

Worse is likely to come, he suggested, potentially dragging the rest of Europe in its wake.

Cologne’s industry-friendly Economic Institute (IW) has warned of a self-fulfilling prophecy, suggesting pessimists are “talking up a crisis”.

Sitting on the fence is Commerzbank’s chief economist Jörg Krämer, saying Germany finds itself in the “grey zone between measly growth and recession”. That hasn’t stopped the bank cutting its German growth forecast for next year from 1.3 to just 0.8 per cent – while the federal government is still hoping for 1.5 per cent.

Bluechip German businesses are no longer waiting around and have urged Berlin to get ahead of events – unlike a decade ago – and roll out measures to take the edge off any slowdown.

BASF chief executive Martin Brudermüller has called for a new reform agenda similar to the Schröder-era Agenda 2010. Leading economists have picked up on his call, suggesting new business-friendly proposals: new write-down rules for firms to encourage and aid big-ticket investment, and a concerted effort to relaunch stalled efforts to invest in climate protection and critical infrastructure from broadband and bridges to trains and kindergartens.

A decade ago, such talk of public spending into a downturn would have spooked most German economists – and politicians – who are schooled in ordoliberal thinking: that state investment in a downturn is only prudent after energetic pruning and that Keynesian theory is the work of the devil.

“In the German scene you would have been dubbed a bogeyman for even suggesting anti-cyclical investment,” said Prof Ferdinand Fichtner, an economist at Berlin’s HTW university of applied sciences. “But now a growing number of people see it can be a good thing for the state to invest and stimulate the economy at a time like this.”

After feeling Berlin’s ordoliberal whip in the euro crisis, a growth in pluralist economic thinking in Germany may be a cause for cheer among its European neighbours. Another is German federal finance minister Olaf Scholz: anxious to show that, even running for the leadership of his Social Democratic Party (SPD), he hasn’t taken his eye off his day-job.

Speculation is growing that he is readying an investment package of up to €50 billion if needed to take the edge of the economic slump ahead.

This week he pushed through what – on paper at least – looks like a well-timed economic stimulus measure. Nearly three decades after the fall of the Berlin Wall her cabinet agreed on Wednesday to phase out the so-called “Solidarity Surcharge” for all but Germany’s top earners.

The levy was introduced to finance the cost of German unification in 1990 and every working German pays 5.5 per cent of their income tax into the so-called “Soli” pot. Now 90 per cent of Germans are to be taken out of the solidarity net.

Unfortunately for German taxpayers – and the economy – the measure won’t kick in until 2021. If the recession bites, extra measures may be needed far sooner. With a fiscal surplus of €58 billion in 2018, Scholz has plenty of cash for emergency measures. Stimulating Europe’s largest economy without extra borrowing – and endangering Berlin’s hallowed balanced budget – means there might just be enough German jam for all to save Christmas 2019.