FG MEP Brian Hayes says inquiry should not be country-specifc 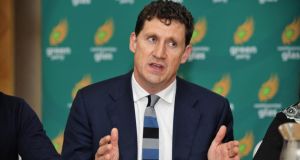 Green party leader Eamon Ryan has criticised Fine Gael’s four MEPs for not voting in favour of a European Parliament committee of inquiry into the Luxembourg Leaks scandal this week in Strasbourg.

“The failure of Fine Gael MEPs to support an inquiry into the Lux Leaks tax scandal confirms that the Government has no desire to tackle corporate tax avoidance, either here or abroad,” the Green Party leader said. “By closing ranks with Jean-Claude Juncker, and attempting to protect him from this storm of revelations, they have given a carte blanche to companies and politicians to engage in and facilitate tax avoidance.”

Fine Gael’s four MEPs are a member of the European People’s Party (EPP) group of which European Commission president and former Luxembourg prime minister Mr Juncker is a member. Mr Juncker led Luxembourg when the controversial tax deals highlighted by the Lux Leaks revelations were negotiated.

However, Dublin Fine Gael MEP Brian Hayes defended his decision not to back the inquiry, saying that it was vital that such a committee looked at the tax practices of all 28 EU member states, and not just specific states such as the Republic.

“If a Committee of Inquiry is to go ahead, the terms of reference must be fair and balanced. This cannot be a witch hunt against some member states,” he said. In Strasbourg, Minister Hayes said that the committee of inquiry proposed by the Green/EFA group in the European Parliament was a PR stunt, which could “backfire against Ireland. ”

The Green group in the European Parliament this week garnered the required support of 25 per cent of MEPs to call for a Parliamentary inquiry into the Luxembourg Leaks scandal.

Committees of inquiry can be set up to investigate breaches of EU law, provided they have the support of 25 per cent of MEPs, though they must also be endorsed backed by the chairs of the various political groups.

Ireland’s corporate tax regime has come under increased scrutiny in Brussels in the wake of the Lux Leaks scandal. Three countries - Ireland, Luxembourg and the Netherlands - are under investigation by the European Commission for tax deals offered to four multinational companies, with the European Commission due to publish further details of its investigation into Luxembourg’s tax arrangements with Amazon tomorrow.

Mr Hayes - and the Government - have repeatedly argued that tax practices in all member states should be analysed as part of any EU clampdown on tax, arguing that larger member states are also offering tax rulings to specific companies.

Mr Ryan said yesterday that ensuring that international corporations in Ireland pay their fair share of tax would “go a long way” towards improving Ireland’s budget and help deal more effectively with crises in housing and health.

In Strasbourg on Wednesday, Philippe Lamberts, co-president of the Green group, said the proposal had received the support of 194 MEPs from across the various political groups in the European Parliament. German MEP Sven Giegold said he expects more signatures in the coming days. About 30 MEPs from the Socialists and democrats group and 20 from the European People’s Party (EPP) groups backed the plan, he said.

Despite widespread outrage at revelations that Luxembourg offered tax rulings that helped hundreds of companies slash their tax bills, the two main groups in the European Parliament - the centre-right European People’s Party (EPP) and the centre-left Socialists and Democrats (S&D) - have stopped short of calling for a commission of inquiry.

A spokesman for Mr Juncker said on Thursday that the European Commission president will cooperate with any inquiry.