The Apple user or Nespresso drinker appreciates not only the physical good, but the entire experience of interacting with the business 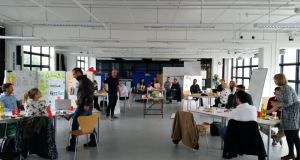 Participants in the service design masterclass at the NCAD: their challenge was to conceive and run a live service for the public within three days.

A customer’s relationship with a service is often unpleasant and short. But occasionally something unexpected happens: a customer experiences something positive and valuable. A happy customer is an extraordinary thing. So extraordinary that this first moment of happiness with a service can be a prelude to a long-term, perhaps even life-long, relationship with the service provider.

The life-long Apple user, Volvo driver, or Nespresso drinker, appreciates not only the physical good, but the entire experience of interacting with the business that sells the good. That includes the marketing material, the place or method of purchase, the packaging of the product, the method of its delivery, the experience of using it, and so on. In other words, these businesses have taken care to plot every point in the lifetime of their relationship with the customer and consider how to make these enjoyable and perhaps valuable.

Few businesses do this. But when they do, what they are engaged in is called service design. And it is a big deal.

The course was so novel that several senior NCAD staff participated not as teachers, but as students. The other attendees included staff from architecture and design practices, one financial services firm, and Dublin City Council’s novel Beta Unit, among others. The masterclass set participants the big challenge: conceive and run a live service for the public within three days.

The logic was simple, says organiser Dubhthaigh. To make it work you have to leave the building. That means getting out onto the street and talking to the public. “You can only really understand value by going and doing it,” says Dubhthaigh.

Near the end of day one we were set a challenge: launch a new service for tourists in the Liberties area of Dublin. The team I worked on included two designers and an architect. Within three days, with no overtime, we had a minimum viable product up and running. By the end of day three we had enough feedback to set pricing and redefine the offering in such a way that we could have launched a pilot product with reasonable certainty of generating revenue. Here is how we did it.

We hit the streets and spoke to tourists walking toward the Guinness Storehouse, and to locals on Thomas Street. One hour’s work taught us that tourists faced a paradox. On the one hand they liked the edginess of the Liberties and wanted to experience real Dublin. On the other they were intimidated by the area and needed permission and a sense of safety to engage with it. We also learned something else. Our customers were more likely to be groups rather than individuals.

Our team developed a concept that reestablished the Liberties historic meaning. The area had been outside the City walls, and operated its own jurisdiction in which its people lived under different laws and rules. Things were, legally at least, different there. We used this to develop a simple concept we called “Take Liberties”, a set of note cards to guide tourist groups to a different experiences that brought them into contact with locals, off the beaten track. Each experience would have an irreverent, playful tone. And so, by the end of day two, we had an idea to test.

In the morning our team built a prototype of several tour cards and a container using cardboard, a colour printer, and markers. This took an hour. Then we hit the streets to get feedback. The results were exactly what we needed: first, we discovered that we were describing the product the wrong way. Tourists found our “mystery tour” idea off-putting. It needed to be something like “The ‘Real’ Dublin Challenge”, which they liked. Second, they wanted to see samples of the experiences on the outside of the box, so they knew exactly what they were getting. Third, the tourists were enthusiastic about the challenges in the tour. On average, they said they would pay €1-€2 per challenge.

Within three days this quick and dirty approach to developing a service, testing it, and refining it, had yielded a potentially strong offering for which we had a rough sense of how much people would pay and how to brand and pitch it.

As Dubhthaigh says, “Value is co-created with users.” Designing a product in isolation, without constantly asking prospective users for their feedback, is a bad idea.

Not just for start-ups

This applies to established businesses too. User feedback on rough prototypes can remove the risk of launching new products or refinements and can help to make the case that something is worth taking forward.

But there is a more profound impact of the service design approach. It puts the user/customer first. And that can mean riding rough shod over the established way of doing things. Whereas precedent, politics, or siloed thinking might prohibit an established business from doing something, putting the user first offers management a reason to reorder internal operations.

Service design based on user needs can improve efficiency, remove unnecessary blocks and connect functions within the organisation.

Only by talking to customers and understanding what they need can senior executives of a business, start-up or behemoth, know what it ought to be doing.