CRH boss itches for return to construction as prudence pays off 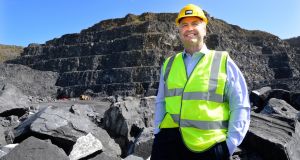 Like many in Ireland, CRH boss Albert Manifold traces back how the scale of the coronavirus crisis struck home for him to when Taoiseach Leo Varadkar walked down the steps of the US president’s guest house in Washington DC shortly after dawn on March 12th to announce the closure of schools, colleges and other public facilities at home.

“It shook us all in this country . . . It was very clear that there was a very significant health crisis emerging,” Manifold told The Irish Times on Wednesday after CRH issued a trading update to the stock market. “In the last crisis, in 2008, which was horrific as well, it took us several months to get up to speed. It took us several hours this time.”

Manifold, a veteran of at least five recessions, said he had been anticipating and getting ready for some slowdown of the global economy. But nothing has prepared business leaders for the speed and scale of this crisis.

Still, the CRH trading statement showed how the group had kicked into gear. The group temporarily laid off and furloughed about 12,000 employees, or about 15 per cent of its workforce, as about 600 of 3,100 its locations were shut down, mainly in Europe. It cut management salaries and board fees by 25 per cent to show a willingness to feel some pain (though Manifold’s remuneration amounted to €9.1 million last year and his and out-of-sync pension benefits remain a bone of contention).

CRH also moved prudently to draw down a €3.5 billion revolving credit facility to boost its level of cash and cash equivalents to $6 billion (€5.5 billion) – enough to meet all of its debt obligations for the next 4½ years.

Shares in CRH shot up more than 7 per cent on the day. They have now recovered half the losses sustained in last month’s global equities sell-off.

In North America, CRH has managed to keep business levels at between 80-85 per cent of normal activity as construction has been deemed an “essential activity” in most US markets and the group is mainly involved in the “open air” end of the construction game where social distancing guidelines are easier to follow. It is the biggest roadbuilder in the country.

CRH’s businesses in Pennsylvania, New York City and Washington state have been the most affected to date, while it has experienced significantly lower activity levels in Ontario and Quebec as a result of government restrictions on construction in both markets.

Business in Europe has been more heavily affected, with nationwide shutdowns being implemented across a number of markets. The UK is running at 40 per cent of normal levels, France and Spain at 30 per cent, and the Republic at 20 per cent, according to the group. Central and Eastern European businesses have been less affected.

The construction industry is lobbying authorities on both sides of the Atlantic on how it should be among the initial beneficiaries as Covid-19 restrictions are eased. Manifold is chomping at the bit.

“We’re working with authorities towards moving to back-to-work protocols. I’d expect by mid- to end-May, most markets will be back to some level of activity,” he told analysts on a call.

The group’s sale in recent years of its US and European distribution arms, which sell materials to professional builders, heating and plumbing contractors and DIY enthusiasts, may have been partially driven by fact that these are low-margin businesses and CRH was struggling to find meaningful ways to develop them.

But the sales, raising a total of €4.3 billion, now appear prescient. These types of businesses are at the coalface as Covid-19 wreaks havoc on economies globally.

CRH is a much more infrastructure-focused group than it was heading into the global financial crisis, leaving it well positioned to benefit from likely stimulus programmes both sides of the Atlantic as governments seek to reboot their economies, according to analysts.

The group’s decision to stick to its almost €494 million final dividend for 2019 – the biggest shareholder pay-out plan on the Iseq – will also be taken as a vote of confidence as many other companies have scrapped such proposals in light of the crisis. CRH also continued to pay a dividend throughout the last downturn.

Still, eyebrows have been justifiably raised at the fact that that shareholders are receiving their planned compensation when CRH is participating in payment subsidy schemes. The company confirmed to UK media this week that staff at its Tarmac unit that have been furloughed are being paid on part by a job retention scheme there.

Staff that have been temporarily put on leave in the Republic are also believed to be benefiting from the Government’s temporary wage subsidy scheme. A spokesman declined to comment.

Meanwhile, CRH’s Covid-19 planning didn’t go as far as to offer the most transparent of annual general meetings (agm) this week.

Companies globally are restricting shareholder attendances to agms to the minimum required to meet quorums – as they adhere to new restrictions from governments and guidelines from health authorities.

But many, including the banks, insulation giant Kingspan and Dalata Hotel Group in Ireland, are offering investors the opportunity to dial into their meetings by teleconference or through webcasts. These are allowing shareholders to listen to responses to questions that have been submitted beforehand.

CRH offered neither. Investors who submitted questions in advance were informed by email by the company secretary that they would receive a response “in due course”.