Creative thinking from inside the box

The best innovations come from adapting and reworking existing models, say the authors of a new book 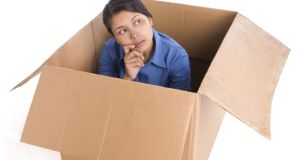 Those seeking innovation within their organisation constantly call on staff to think “outside the box”.

However, according to the authors of a new book, the search for originality may in fact hinder innovation efforts. The best innovations, they say, come from adapting and reworking existing models.

In Inside the Box, Drew Boyd and Jacob Goldenberg present a template for innovation based on this premise. Systematic Inventive Thinking, an approach the authors say they helped create and refine, lies behind much of the innovative process going on at companies such as Apple, Google and Twitter, they claim.

Boyd is a veteran of healthcare company Johnson & Johnson and lectures on marketing and innovation at the University of Cincinnati. Goldenberg is professor of marketing at the Hebrew University of Jerusalem. The two have been collaborating since they met in 2002.

‘Embedded patterns’
“What we’ve found is that there are patterns that are embedded into the practice of innovation over thousands of years. Once you recognise these, you can extract and leverage that DNA,” says Boyd.

The central idea of the book is that there are five techniques that innovators use to become more creative.

These are subtraction, division, multiplication, task unification and attribute-dependency. The book explores how organisations can be more innovative by using one of these templates.

Subtraction works by removing something that was previously thought essential. Discount airlines removing the frills provides a good example, as does the development of personal music players back in the 1980s, ie cassette players without the recording function.

Division works by dividing an existing object or service into different parts to either create a new benefit or a benefit delivered in a novel way – think, for example, of the TV remote control.

Multiplication involves copying a function in a useful way – the small training wheels attached to the rear of a child’s bicycle, for example.

Task unification involves a two-in-one benefit such as facial moisturiser that doubles as sunscreen, while attribute-dependency brings together two previously unrelated features, such as a car windshield wiper that changes speed as the volume of rain changes.

The ‘aha’ effect
Boyd says the majority of new and successful innovative products and services fall within one of these five templates and, counterintuitive though it may appear, being creative involves a systematic process around one of these templates

The most popular and successful innovations are the ones people can most easily understand and relate to – the ones that elicit the “aha” effect.

Companies frequently use “addition” – “Firms often fall into the trap of adding new features to outshine the competition, but merely adding components doesn’t give you the multiplier effect and frequently what you get is just feature creep. Continuously adding bells and whistles to a product or service isn’t necessarily a good idea.”

Sometimes ideas that appear ridiculous can result in successful innovations. Witness the spirit level that isn’t level but one degree off.

A company has built a business around this with a product that apparently appeals to workmen who need to build a precise slope into floors, for example.

It also involves a change in mindset. Managers typically start by looking for solutions to known problems. Instead they need to imagine possibilities and ask “what if” questions.

Freeing managers from the constraints of having fixed goals actually unleashes a wave of creativity, he says.

Highly receptive
“In our approach, we start with an abstract solution and then work back to a problem that it solves, exactly the opposite method to the one most people use,” Boyd explains.

According to Boyd, challenging the corporate suits to think in this way is not as difficult as it may seem.

“We have found that CEOs and business leaders are highly receptive to this message. They are typically smart, hungry and very frustrated at the lack of innovation in their organisations, and they embrace it very quickly,” he says.