Who’d be a listed Irish housebuilder in this market? 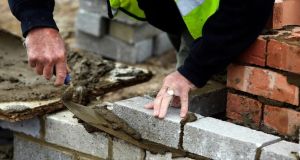 The latest figures point to labour costs in the construction industry growing at an annual 5.4 per cent rate in the second quarter. Photograph: Chris Ratcliffe/Bloomberg

It’s a decade to the week since boom-time developers Bernard McNamara and Ray Grehan took desperate measures as the property market was in freefall.

Faced with being left with hundreds of freshly-build houses and apartments and no buyers, the two began to offer interest-free loans of up to 30 per cent (in McNamara’s case) on the purchase price of new homes. Both would declare bankruptcy within a little over four years.

Ten years on, with Irish home price inflation running at 12 per cent and house completions running at half the rate of estimated annual demand of 35,000, you’d think shares in the few well-capitalised, publicly-quoted companies with enviable land banks that have floated in recent years would be in high demand. You’d think.

Cairn Homes, which raised €440 million in an initial public offering (IPO) in 2015 and a further €280 million in follow-up deals to snap up assets such as a residential loans portfolio from Ulster Bank and land in Dublin 4 from RTÉ, has seen its shares fall up to 24 per cent so far this year.

Glenveagh Properties raised €550 million last October to become only the second Irish housebuilder to float in almost two decades. After racing almost 26 per cent ahead to €1.257 within three months of listing, the stock has subsequently sold off, and was trading just five cent over its IPO price earlier this week.

Glenveagh issued a pretty solid set of interim results on Monday, saying it was on track to deliver 250 homes this year. Analysts see little difficulty with the company reaching its target of building at least 1,000 homes a year from 2020. It is set to have 800 under construction by this Christmas.

On Tuesday, Cairn Homes’s chief executive, Michael Stanley, raised his medium-term housebuilding targets and signalled to investors that they can look forward to dividends of at least 50 per cent of distributable income from early 2020.

Stanley even hinted that Cairn might have too much cash at some stage, which could wing its way back to shareholders by way of special dividends. Its current land bank has the capacity to deliver 14,500 homes – enough to keep Cairn going for nearly a decade. The reaction? Shares were down almost 4 per cent on the day.

Ronan Dunphy, an analyst with Investec in Dublin, says some of the investor apathy may be down to concerns about accelerating construction costs, with the latest Central Statistics Office figures pointing to labour costs in the industry growing at an annual 5.4 per cent rate in the second quarter. Still, Cairn has managed to keep its build cost inflation at 2.9 per cent, while Glenveagh has stuck to its 4 per cent guidance.

“Both homebuilders are able to offer subcontractors long pipelines of steady work which makes them attractive employers and constrains the upward pressure,” said Dunphy. “They are also beginning to benefit from procurement efficiencies and volume rebates as they scale upwards. So the fears are valid, but probably overdone.”

Dunphy said the market is also beginning finally to appreciate that the rate of price increases for new-build starter homes is running at less than half the 12 per cent headline rate. In fairness, today’s publicly-traded sector players are not building their models on house price rises, unlike the debt junkies that prowled round before the crash.

Market sources say Cairn and Glenveagh have also been hit by general market malaise in Europe at the moment as major global investors continue a trend – seen throughout 2018 – of shifting money from this side of the Atlantic to the United States. Others point to a sell-off across British housebuilders in recent months having had a spillover effect in Dublin.

Still, some of the blame may lie closer to home. Glenveagh’s stock has fallen as much as 15 per cent since it went about raising €213 million in July to finance more land acquisitions and development. The two-part deal involved placing shares with large institutional investors and an “open offer” to existing investors.

Existing investors took up only a third of what they were entitled to. Institutions that had agreed to buy leftover stock were left with more shares than they might have envisaged – resulting in a perceived overhang of stock.

In addition, US private equity firm Oaktree, which set up Glenveagh in the beginning and rolled a number of its Irish land bank into the vehicle in return for a 16 per cent stake at the time of the IPO, raised eyebrows when it flogged half its stock at the same time as the fundraising.

News this week that Cairn co-founder Alan McIntosh, a Scottish serial entrepreneur, has stepped down as an executive director to become a non-executive board member has also prompted chatter that it is only a matter of time before he starts cashing in his chips.

None of this bodes well for US private equity firm Lone Star, which has plans to float another Irish housebuilder, led by Patrick Durkan, managing director of Durkan Residential.

There’s little doubt that Ireland needs more well-financed, publicly-quoted companies to drive output in the coming years. But who’d be brave enough to pull the trigger on an IPO in this market?