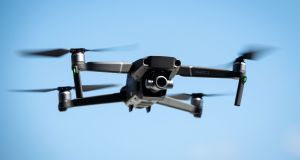 Transport Infrastructure Ireland (TII) is to pay a Dublin firm €100,000 to use drones to help survey the country’s multibillion euro motorway system.

Dublin firm Korec has won the five-year contract and, according to spokesman for TII Sean O’Neill, the UAV (unmanned aerial vehicle) or drone technology will cover as much ground area in one flight in under an hour as a traditional ground-based survey team would cover in 14 days.

“As a result multiple flights can be undertaken in one day based on requirements,” he said.

According to Mr O’Neill, the new contract – which will involve the use of two drones – will produce cost savings for TII.

TII currently oversees 1,220km of motorway and dual carriageway across the country and, up until now, when carrying out inspections, TII deploys staff in the field with the task of setting up traffic management and diverting traffic, but that will be avoided by being able to put a drone in the air.

He added: “UAVs will reduce the need for procurement of aerial surveys for route designs from third parties through the use of planes.

“You typically do multiple surveys as part of the early design stage. Therefore the investment in this technology offers a significant savings in time and resources.”

The contract with Korec includes annual software licensing fees and is fixed for a term of five years.

Mr O’Neill also pointed out that the contract includes two UAVs, and the typical uses will be to perform aerial topographic surveys, corridor mapping, structural inspections and deformation monitoring.

The outputs from the work are to include Digital Surface Models (DSM), Digital Elevation Models (DEM), 3D meshes and fly-through animations.

TII has taken the decision to deploy the drone technology after its success in other jurisdictions and in industries such as agriculture and construction.

Drone technology is being increasingly used by public authorities here. Last year, Clare County Council trialled the use of drone technology for automated beach patrols for the first time here, while several bodies involved in search and rescue operations use drones to locate the remains of missing persons.