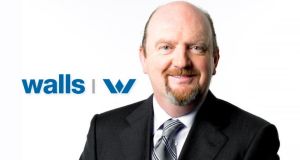 The MBO team and investors were advised by Deloite, Eversheds and Mason Hayes and Curran.

A key participant in the buyout was an investment vehicle headed by Dr Joe Walls and Aidan Walls, representing members of the Walls family not involved in the previous executive of PJ Walls Holdings.

Established in 1950, Walls is one of Ireland’s oldest and largest construction firms. Turnover in 2014 was €84 million and projections based on the current schedule of projects indicate a minimum turnover of €100 million this year, rising to €125 million in 2016.

In 2013, Walls Construction wrote off €19.2 million owed by its parent company, which paved the way for the completion of the buyout. As a result of the MBO, Walls Construction will operate under a new ownership structure and is now separate from PJ Walls Holdings Group.

Mr O’Shea said the company was working on a number of flagship projects, including the new Central Bank Docklands building, the LinkedIn European headquarters and the DAA office building redevelopment at Dublin Airport.

“This is a time of opportunity and the investor backed MBO puts Walls Construction in a strong position to benefit from the upturn in construction. With confidence returning to the Irish construction sector, our experienced team of construction professionals, which has remained intact throughout the downturn, is ready to deliver key public and private sector projects. With the backing of our investors and the commitment of our management and staff, we are confident that Walls Construction will continue to perform strongly,” he said.

1 Majority of employees don’t want to return to pre-Covid working patterns
2 Homeworking is depriving me of juicy gossip
3 Primark rejects £30m bonus for bringing back staff
4 If tourists are such pariahs should we not be testing them on arrival?
5 Investors in Irish solar energy fund in line for €20m payout
6 The $6bn judgment pitting Nigeria against Irish businessmen
7 Tobacco giant’s menthol-ban substitutes take 5% share of Irish market
8 Varadkar and Donohoe to meet banks to discuss mortgage breaks
9 ‘My rent here is so low it’s a joke’
10 Construction activity rebounds as sites re-open
Real news has value SUBSCRIBE