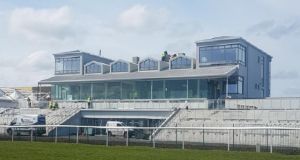 Punchestown: the racecourse said the Hunt Stand was completed on time and on budget

Punchestown Racecourse has invested €4 million in a new stand that it plans to open on the first day of its annual festival next week.

The Kildare Hunt-owned racecourse is working on a €6 million plan to upgrade facilities for its customers. According to its marketing director, Shona Dreaper, a €4 million investment in the new Hunt Stand was the central element of its redevelopment.

“We wanted to elevate and enhance our customers’ experience,” Ms Dreaper said. The new stand gives racegoers a view over the straight close to the last fence, and has new bars, restaurants and private boxes.

The stand, supported by the Kildare Hunt and the Punchestown board, was completed on time and on budget, according to Ms Dreaper. It was built by the construction company Elliott Group, working with the quantity surveyor John Casey and Seamus McCloskey of Hamilton Architects.

Punchestown has recruited a number of new race sponsors, including the customer-service specialist SalesSense, which last week signed a three-year deal to back a €25,000 novice hurdle on the Friday of the festival, which this year runs from April 24th to 28th.

The financial-services group Close Brothers, which also supports the Cheltenham Festival, has also come on board. They are joined by the local firms PDM and Profile Systems. BoyleSports, Ladbrokes, AES, Ryanair and Coral are all continuing their long-standing associations with the festival.

Sponsors are contributing to the €3 million in prize money that Punchestown will offer this year, a new record for the festival. That fund will play a key role in the battle for the Irish National Hunt trainers’ championship between Willie Mullins and Gordon Elliott, whose Tiger Roll won Saturday’s Grand National at Aintree, just beating Mullins’s Pleasant Company.

Prize money decides who gets the title. Mr Elliott is leading the way with a lead of more than €500,000, but the total on offer could aid Mr Mullins’s efforts to catch his rival. Mullins has been leading trainer at the festival on multiple occasions.

More than 17,000 of those attending will be corporate-hospitality clients. “We are at 98-99 per cent capacity in corporate hospitality,” Ms Dreaper said.