The hills have ayes: Donegal Airport ‘world’s most stunning’ 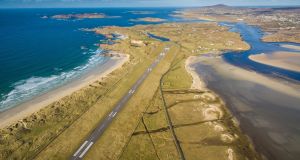 Donegal Airport is the world’s most stunning according to clients of a leading private jet charter company.

Private Fly, a global executive jet charter company, has named the airport in Carrickfinn, Co Donegal as the world’s “most stunning”.

The runway runs parallel to the the coast giving passengers taking off and landing views of the Atlantic, cliffs and surrounding hills and valleys.

This is the third year in a row that Private Fly’s clients have singled out the northwestern airport.

In 2017 it was named the second most scenic after Saba in the Dutch Caribbean. Clients ranked it in the top 10 the previous year.

Regional carrier Stobart Air, which operates out of Donegal, congratulated the airport on being ranked the world’s most stunning.