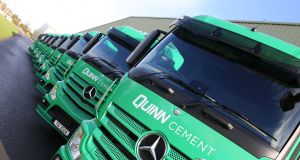 Quinn Industrial Holdings (QIH), the industrial conglomerate formerly controlled by Seán Quinn, increased profits by 59 per cent last year as sales volumes grew on both sides of the Border.

Pretax profit at the group increased to €10.8 million, boosted by efficiencies in processes, according to the company.

Earnings before interest, tax, depreciation and amortisation grew by 31 per cent to €23.9 million in the period.

“Despite the significant macroeconomic challenges posed by Brexit, we continue to invest, grow sales, innovate and drive margin growth. Encouragingly, volume growth trends from 2017 are continuing year-to-date in 2018 and at this point we are firmly on track to deliver our fourth successive year of strong earnings growth,” said Liam McCaffrey, the company’s chief executive.

The results, showing a 7.4 per cent increase in turnover to €209 million, are the third set of 12-month figures since businessmen John McCartin, John Bosco O’Hagan and Ernie Fisher led a buyout of the QIH businesses in 2014, backed by a group of US hedge funds, Brigade Capital, Contrarian Capital and Silver Point Capital.

Mr Quinn, the founder of the Quinn cement-to-insurance empire which imploded after his family lost billions of euro in a failed financial bet on Anglo Irish Bank shares, left the company in May 2016, a year after he was hired as a consultant.

QIH is comprised of two divisions: building products and packaging. The building products arm “delivered a very robust performance” last year, driven by a recovery in construction in the Republic as well as stronger exports to Britain.

Both divisions are targeting further growth this year, according to chief financial officer Dara O’Reilly, who said the company is continuing to benefit from “strong operating leverage, with higher volumes driving margin growth and return on the investment expenditure of recent years”.

Capital investment during 2017 dropped on the previous year to €7.6 million from €11.5 million and the company is forecasting “further significant investment” this year.

“Post year-end we are taking delivery of a further 33 new trucks as part of a €3 million fleet upgrade, with further investment planned. This ongoing investment reflects QIH’s positive outlook for the business and our commitment to driving sustainable growth post Brexit,” Mr McCaffrey said.

QIH has operations across Ireland in addition to a cement import facility in Kent and employs around 800 people.