Magrethe Vestager rules that construction finance is within Nama’s remit 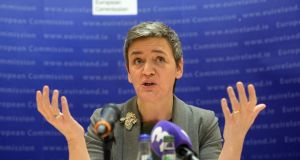 Nama does not charge interest at less than market rates when it lends developers money to build homes, according to the EU competition commissioner, Margrethe Vestager.

The decision came in her ruling against a complaint by the builders Michael O’Flynn, Paddy McKillen, David Daly, Pat Crean and MKN Properties that allowing Nama to finance 20,000 new homes was illegal State aid, as the agency could raise money more cheaply than private businesses.

Ms Vestager said that Ireland confirmed to the European Commission that Nama charged market rates when it loaned money to house builders and that the commission did not believe, in any case, that Nama’s interest rate was important in its own right. “Indeed, Nama’s return mainly depends on the proceeds from selling the completed development and the new loans are awarded to enable these developments.”

Ms Vestager argued that a private operator would consider the total return – the interest plus the profit from the sale – rather than focusing on whether the loan charges were in line with the market.

Nama recently reported that it lent borrowers €384 million to build homes and offices in the first nine months of 2017. Opponents argue that this distorts competition – illegally under EU law, as Nama is a State body.

The builders’ original complaint also argued that this exceeded Nama’s original purpose, which was to save the Republic’s financial system by taking over banks’ property loans.

But Ms Vestager said that financing building projects did not go beyond Nama’s original mandate and that the agency maximised returns by lending to some debtors or receivers to allow work on developments that it judged to be viable. Ms Vestager said this was in line with Nama’s objectives of boosting its assets’ value and getting the best possible return for the State.

The objectors disputed this, saying that an October 2015 statement in which Nama said it would build 4m sq ft of offices in Dublin, and 20,000 homes, made it clear that the agency’s objectives had changed.

They added that an internal document, Deleveraging Nama in a Complex Global Environment, acknowledged the agency’s “evolution” and referred to its “core business” in housebuilding and the capital’s docklands.

“Based on this evidence, it is difficult to understand how anyone could conclude that the purpose of Nama had not fundamentally altered at the date of the complaint in December 2015,” they said.

The builders also rejected Ms Vestager’s conclusion that Nama operated like the private-equity funds that bought Irish property loans. “It is patently incorrect to suggest that they operate in a similar manner,” said the objectors. “None of those funds lends to distressed borrowers for the purpose of undertaking new development.”

The five have yet to decide if they will appeal Ms Vestager’s ruling to the European Court of Justice. She announced her findings last month but published the detailed ruling on Monday.

Stocktake: Time for some seasonal stock market strength? 05:50
Stocktake: Global investors want Biden to win 05:40
Stocktake: A Biden victory is not fully priced into markets 05:10
Ghost newspapers and zombie brands are stalking the media 05:03
Up or down – how much is your Local Property Tax this year? 05:00

1 How much state pension will I get next year?
2 Brexit to curb services trade with UK, accountants group warns
3 Up or down – how much is your Local Property Tax this year?
4 How long can Government afford to keep State pension age at 66?
5 Tesco takes to the skies with home delivery by drone
6 Pandemic halves the value of venture capital deals in third quarter
7 Hurrah for the companies giving staff more time off
8 Stocktake: Tesla profitable, but still expensive
9 Oxford Covid vaccine trials offer hope for elderly
10 Sustainable investment: How your pension can help tackle climate change
Real news has value SUBSCRIBE