Irish construction firms reduce exposure to UK ahead of Brexit 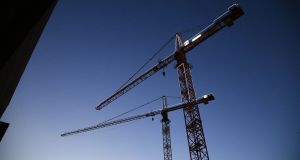 Nearly half of Enterprise Ireland-supported construction firms have reduced their exposure to the UK in advance of Brexit, with some 70 per cent said to be eyeing up opportunities in mainland Europe, a new survey has found.

Irish construction firms are heavily reliant on the UK market, exporting everything from timber and precast concrete to architectural and engineering services.

However, the Brexit dynamic has cast a shadow of uncertainty over the UK market while the collapse in sterling against the euro has eroded the competitiveness of Irish exports.

Nonetheless, the latest survey, carried out by Enterprise Ireland and financial firm Investec, found that despite the Brexit risk, Irish firms still saw the UK as the market with the best near-to-medium term opportunities.

For those retaining a presence in the UK, respondents highlighted currency volatility as a key issue for construction companies looking to price and tender longer-term projects.

They also indicated that they were increasingly looking to mitigate currency risks through sourcing more UK suppliers, while others have introduced more conventional currency and raw materials hedging tactics.

The key opportunity areas identified in the UK were largely around housing, the UK government’s “Build to Rent” schemes and public infrastructure projects.

“We can see that the constraints of moving into a new market identified by our respondents are multifaceted,” he said.

“Equipping construction firms with the skills to overcome these challenges will likely deliver tangible benefits, with 72 per cent of respondents saying that they would increase their employee numbers if they move into new markets,” he added.

Enterprise Ireland is producing a series of “Export Market Watch” surveys designed to help support exporting firms here by providing insights into developments in various export markets, as well as the outlook for exchange rates, to support their diversification plans.

The agency is advocating market diversification as the only realistic policy for dealing with the uncertainty of Brexit. It noted the proportion of Irish exports Enterprise Ireland-supported firms going to the UK has declined from 45 per cent in 2005 to 37 per cent last year.

In particular, it predicted that new markets, particularly the euro area, would grow in terms of importance in the next few years for firms who provide specialist data centre and pharmaceutical plant construction expertise.

While 52 per cent of firms currently do business in the euro zone, only one in three believe they have sufficient resources in place to expand into new markets.

The agency said market knowledge was cited by firms as the highest barrier to entry while other challenges included, adequate staffing; customer targeting and regulatory uncertainty.