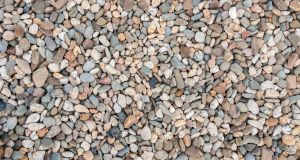 The Irish Concrete Federation confirms demand for aggregates in Ireland is at 12 tonnes per capita; twice the current EU 28 average. Photograph: iStock

The State will need to produce an estimated 1.5 billion tonnes of aggregates – crushed rock, sand and gravel – to meet housing and infrastructure demand arising from the Government’s Project Ireland 2040 plan, according to the Irish Concrete Federation (ICF).

Following publication of a report assessing future requirements, the ICF called on the Government to ensure future supply of aggregates “is planned, monitored and managed in a sustainable manner, to provide for Ireland’s future infrastructure development”.

The report confirms demand for aggregates in Ireland is at 12 tonnes per capita; twice the current EU 28 average, “due to Ireland’s infrastructural deficit, dispersed pattern of settlement and resulting large road network”.

The ICF warned that scarcities of some aggregates were emerging in the eastern and midland regions, due to natural shortages, lack of forward planning and shortcomings in the planning process.

Its chief executive Gerry Farrell said strong political leadership was needed to bring forward a national aggregates policy as a proper response to the future infrastructure needs and demographic change across the country.

“Ireland has abundant natural reserves of high-quality aggregates but their future accessibility must be planned for and protected by Government. A lack of future planning and priority in the planning process and delays in achieving prospective quarry planning permissions will result in future shortages in the supply of some types of construction aggregates in certain areas of the country,” he added.

“We look forward to working with Government to deliver a sustainable framework that promotes the identification, protection and extraction of aggregates in a sustainable manner, supportive of environmental protection and the circular economy,” Mr Farrell said – local supplies reduce transport distances and reduce their carbon footprint.

The policy should be reflected in local and regional planning policy and include provision to provide a direct route to An Bord Pleanála “to fast-track critically important quarry planning applications”.

The ICF said the average decision-making time frame for quarry planning applications was 76 weeks, with some decisions taking in excess of two years, as practically all decisions are appealed to An Bord Pleanála. Currently there are 500 large commercial quarries extracting raw materials for the construction sector.

It also calls for “longer durations of planning authorisations for extractive developments, certainty of planning enforcement and firm and consistent public procurement policy to ensure supply to the marketplace only comes from authorised operations”.

Speaking at an ICF event in Dublin, Koen Verbruggen, director of the Geological Survey of Ireland, welcomed the publication. “Raw material potential has recently been explicitly recognised within the 2019 Climate Action Plan as a key potential rural employer, while local sources of aggregates are vital in the drive to reduce our carbon footprint and to transition towards a more sustainable society,” he added.

Minister of State for Natural Resources Seán Canney said he was aware of the key role aggregates would play in the delivery of Project Ireland 2040. The Government would work with stakeholders to ensure the planning system was “reformed and streamlined to allow for this”.

1 In this strangest of recessions, what happens next for Ireland?
2 Michael O’Leary is the boss you want to lead an airline out of crisis
3 Should I switch bank now with Ulster Bank at risk of closing?
4 Bank of Ireland sees about 2,000 staff apply for voluntary redundancy
5 Estée Lauder staff at Dublin airport plan further strike action
6 Ireland’s Covid-19 economy in five graphs
7 Minister seeks AG’s advice on banker accountability laws
8 Fortnite owner signs multimillion deal to buy Irish ‘kidtech’ firm
9 Overhaul of lease arbitration regime would be a game changer for retailers
10 Best Covid-19 ‘influencers’ will avoid hectoring
Real news has value SUBSCRIBE