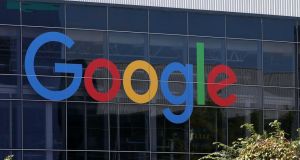 Google Ireland Ltd, the Dublin-based company which trades in Europe, the Middle East and Africa, saw its turnover increase to €18.3 billion last year, from €17 billion in 2013, primarily as a result of increased advertising revenues.

The number of staff employed by the company rose by 17 per cent, to 2,763 direct employees, and it invested a further €78 million in Ireland, bringing total investment in capital assets in Ireland to more than €500 million.

In a statement released with the results, the head of Google in Ireland, Ronan Harris, said the Dublin office was now the multinational’s largest outside the US with more than 5,000 direct and contracted employees.

“Our ability to find people with the skills and talents we need to be able to build a strong business is hugely important and we’re continuing to recruit great talent in Dublin to support our customers across Europe,” he said.

The company reported pretax profits of €209 million, up from €189 million in 2013. It paid tax of €41.5 million. Cost of sales was up to €5.6 billion, from €5.1 billion, with the bulk of this comprising amounts paid via revenue-share agreements with Google Network Partners and others. Administrative costs were €12.5 billion, up from €11.7 billion, with the increase being due to extra staff, increased sales expenses and increased royalty payments.

During 2014, Google Ireland bought the Grand Mill Quay building on Barrow Street, Dublin, for €65.1 million, and the Dock Mill Building, also on Barrow Street, for €13.9 million. Earlier this year, it announced it was building a new €150 million data centre at Profile Park, West Dublin. The company invested €73.9 million in research and development during 2014, a marginal increase on the previous year.

The accounts show the bulk of staff during 2014, 1,809, were involved in sales and marketing, while 332 were involved in engineering and operations, and 436 were in the “general and administration” category. Total payroll costs in 2014 were €324 million, up from €273 million the previous year.

The reach of the company’s activities is illustrated by data on forward exchange contracts for various currencies contained in the accounts, with the currencies mentioned including the yuan, the yen, the Turkish lira, the Thai baht, the rouble, the rupee and the Ukrainian hryvnia, as well as the US and Canadian dollars.