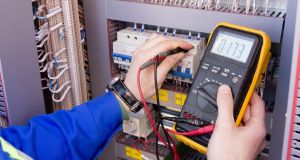 National Electrical Contractors Ireland members must increase electricians’ pay to between €23.49 and €24.34 an hour, depending on service, from about €18 to €21 an hour. Photograph: iStock

The High Court this week stayed a part of the Minister’s order, which demanded that these companies and their staff join the Construction Workers’ Pension Scheme, following a challenge by National Electrical Contractors Ireland (NECI), which represents small and medium-sized contractors based mainly outside Dublin.

NECI members must still increase electricians’ pay to between €23.49 and €24.34 an hour, depending on service, from about €18 to €21 an hour. Employers face prosecution, fines and possibly jail, if they fail to comply.

One NECI contractor, employing 60 electricians, warned that this would add €265,210 a year to wages, forcing the firm to let workers go or close down. Another calculated that it would add 31.75 per cent to costs, threatening viability and profitability.

Smaller contractors fear these costs would force them out of the domestic market, where they compete with sole traders who are not subject to the Minister’s order. Losing this business would close many member companies, NECI warns.

Mr Justice Charles Meenan stayed the pensions ruling pending the outcome of a full challenge to Mr Breen’s order which NECI hopes the High Court will hear in the autumn.

NECI is challenging the order on several grounds, including that the Industrial Relations (Amendment) Act 2015, under which Mr Breen made it, is unconstitutional, as it allows individuals and bodies other than the Oireachtas to make laws.

If the court upholds this argument, then this could have a knock-on effect in the entire building industry, as the 2015 act determines pay and other conditions for the sector as a whole.

Helen Callanan SC with David O’Brien and solicitor Harry Carpendale, for the NECI, explained to the court that the order would have allowed the Construction Workers’ Pension Scheme, a private body, to set minimum contributions for electrical contractors and their workers.

As the court was satisfied that these bodies were “substantially representative” of the industry, according to the Industrial Relations (Amendment) Act, 2015, it recommended that the Minister make the sectoral employment order.

However, NECI maintains that the industry associations which applied to the court represent mainly big, Dublin-based contractors, which generally work for industry, including multinationals, while its members operate on a much smaller scale.

The organisation also claims that the Labour Court and minister failed to properly follow the procedures set out in the 2015 legislation.

1 How can I view my dead brother’s will if I’m not the executor?
2 Provisional liquidator appointed to Dublin engineering firm
3 Investors pile into property as turnover in build-to-rent sector reaches €2.54bn
4 Mount Charles wins €10m catering contract at Maynooth University
5 Bursting of Tesla bubble a case of ‘not if, but when’
6 Kerry’s Chinese sales set for 30% hit from coronavirus
7 Euro zone and Germany back fiscal boost to tackle downturns
8 Walmart disappoints with weak sales volumes over Christmas
9 Finance Ireland plans stock market flotation in May
10 Must you pay a price for ethical investment?
Real news has value SUBSCRIBE