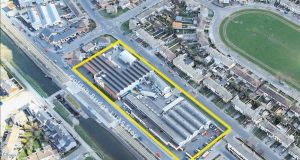 The old Dulux Paints factory in Drimnagh on Dublin’s southside.

A branch of one of the Republic’s best-known building families is seeking fast-track planning permission to build more than 260 apartments for rent.

Durkan (Davitt Road) Ltd has just applied to An Bord Pleanála to build 265 apartments on the site of the old Dulux Paints factory in Drimnagh on Dublin’s southside.

The company is seeking permission under a fast-track system which allows proposals for 100 or more dwellings to go straight to An Bord Pleanála, once the developer has consulted with both it and the local council.

The Oireachtas created the mechanism to ease planning bottlenecks and speed up the supply of new homes.

The builder, part of Dún Laoghaire-based Brian M Durkan & Co, intends renting out the apartments once they are complete, making it the latest of many developers to favour this mechanism over selling the units individually.

Davitt Road is one of the main routes into central Dublin from the city’s western suburbs, running along the Grand Canal and red Luas tramline, through a well-established residential area.

Other documents show that the company has already discussed its plans with Dublin City Council, which will be entitled to take some of the apartments for social housing.

A letter to the builder’s managing director, Brian Durkan, from the council’s executive housing officer, Laura Foran, states that the authority’s “preferred option” is take some of the apartments, but indicates that the final planning permission given will determine how many.

Planning laws allow councils to take a proportion of new developments for social housing or to accept payment instead of this.

The family is one of three branches of Durkans who have been involved in building since the 1960s. However, none of their businesses are connected to each other.

That debt was secured on three sites, Fortunestown Lane, in Saggart, Co Dublin, Bird Avenue in Clonskeagh on the capital’s southside, and Donacumper, Celbridge, Co Kildare.

The accounts state that Devondale was relying on Nama’s support to remain in business and that the directors believed this would continue until work on the sites was complete and the properties sold.

Its parent, Brian M Durkan & Co, is currently selling homes from developments in Clonskeagh and in Fortunestown, Saggart. The latter project involved a €100 million investment. Brian M Durkan & Co is also due to begin selling houses from newly built estates in Walkinstown, Rathmichael and Foxrock shortly.

It is understood that Nama has no involvement in the Dulux site. The planning application gives no details on Durkan (Davitt Road) Ltd’s funding. The company was established last year and is not due to file financial returns for several months.

It also builds schools and some commercial work. It was not possible to contact a spokesman for the group yesterday.