Councillors criticise the Bishopstown plans, arguing site has no infrastructure 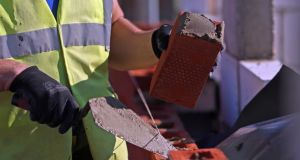 The development will consist of 154 houses and 86 apartments at Ardarostig, Bishopstown on the southwestern edge of Cork city Photographer: Chris Ratcliffe/Bloomberg/Getty

Developer Ardstone is seeking permission to build 240 homes in Co Cork at a cost of more than €50 million through the fast-track planning system.

Ardstone is building and selling houses on sites around the Republic. It is poised to launch various phases of developments in Dublin, Galway, Kildare and Wicklow on the market shortly.

The company recently sought permission from An Bord Pleanála to build 240 homes – 154 houses and 86 apartments – at Ardarostig, Bishopstown on the southwestern edge of Cork city.

Ardstone Homes managing director, Steve Cassidy, said that the total investment in the project would be more than €50 million.

The developer is applying under the strategic housing initiative. This allows anyone who wants to build 100 or more homes to seek permission directly from the planning appeals board, which has 16 weeks to decide on the application.

One of a number of measures designed to tackle the housing shortage, the system is meant to speed large residential developments through the planning process, which developers argued unnecessarily slowed construction.

The company applied after consultations with Cork City Council and a preplanning meeting with An Bord Pleanála. The fast-track initiative requires builders to take both steps.

A number of local councillors, including Fine Gael’s Derry Canty and Fianna Fáil’s Daithí Ó Donnabháin, criticised the Ardarostig plans, arguing that the site had no infrastructure.

However, Ardstone pointed out the proposal “complies with national planning policies and the application takes account of the detailed consultation that took place”.

Local authorities have the right to make observations on applications made under the fast-track scheme.

An Bord Pleanála makes the final decision, which cannot be appealed but can be reviewed by a High Court judge to ensure that the board adhered properly to its procedures.

Ardstone’s site at Ardarostig is close to Cork’s biggest suburb, Bishopstown, near its southern ring road and to the main southwesterly route out of the city.

“Considering the current housing crisis this development will add significantly to the housing stock in this very attractive area of Cork city,” Mr Cassidy said.