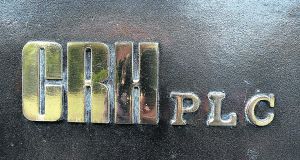 CRH faces the prospect of shareholder pressure to seek a partial or full separate listing of its key US operations as a way of unlocking value in the building materials giant after a weak performance by its shares over the past year.

“The combination of stock under-performance over the past year with the growing size of its US operations appears to have led to a resurgence of investors wishing to discuss the benefits, or otherwise, of a listing of all or a part of CRH’s US operations,” analysts at Deutsche Bank, continental Europe’s largest investment bank, said in a report last week.

CRH entered the US market 40 years ago, and has grown by acquisition to become the largest building materials group in North America, where it makes up almost a half of its sales. Deutsche Bank estimates that the Americas will account for more than 60 per cent of the group’s earnings this year, helped by the imminent closure of its $3.5 billion (€2.8bn) acquisition of the fifth largest US cement manufacturer Ash Grove Cement.

The group sold its lower-margin US distribution arm Allied Building Products for $2.6 billion in January.

CRH shares soared 18 per cent to a record high of €34.53 in the six months after the election of Donald Trump as US president amid hopes surrounding his infrastructure spending plans. However, the value of shares have since fallen back by 16 per cent to close on Friday at €27.57 as investors took a more circumspect view of US construction expenditure.

Deutsche Bank analysts, including Glynis Johnson and Xavier Marchand, said that CRH’s stock was now “inexpensive” as it trades on lower earnings multiples than its peers. “As such, while we struggle to find a trigger to drive the share price from a trading perspective, growing discussions of the potential to list its US operations may provide a boost to the stock price,” they said.

However, they noted that the practicalities of a partial or full listing and the potential implications for such a move on the remaining business “may make any decision at best time-consuming even were it to occur”.

The listing of a stake of less than 50 per cent would enable CRH to continue to consolidate the US business in group accounts.

Still, market sources have indicated that the concept of a US listing has not been a key issue for investors as management, led by chief executive Albert Manifold and his finance director Senan Murphy, engaged with major shareholders following the publication of the group’s full-year results at the start of last month.

CRH’s s earnings before interest, tax, depreciation (Ebitda) rose 6 per cent last year to €3.3 billion to outstrip a 2 per cent increase in sales, to €27.6 billion, as margins grew in all of its divisions.

The group has spent €13 billion on acquisitions in the past five years and earned €5 billion from selling unwanted assets.

The Irish company sold $1.5 billion of bonds last Thursday, which is expected to partly help finance the Ash Grove deal, as well as CRH’s redemption of $287 million of expensive debt which carried an 8.125 per cent interest rate.

Flexible foothold in Dublin’s south docklands at rent of €52.50 per sq ft

1 Will your boss let you work long-term from home – or from abroad?
2 Plans for €2bn Dart expansion lure Bombardier to Dublin
3 Wexford Solar bought by energy giant EDF in deal to build eight solar farms
4 AA Ireland bought by Olivier Sarkozy-led fund for more than €240m
5 Only half the homes needed this year will be built, construction event told
6 Google tells workers to return to country where they are employed
7 McGuinness faces Brexit and Covid grilling at parliamentary hearing
8 Virgin Media unveils new entertainment platform
9 Ryanair signals possible closure of Cork and Shannon airport bases
10 City firms move £1.2tn and 7,500 jobs out of London - EY
Real news has value SUBSCRIBE