Move to create 41 jobs on opening 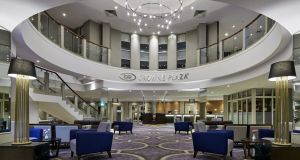 Andras House, the Northern Ireland property development and hospitality group privately owned by the Rana family, is to invest £6.6 million to develop a new boutique hotel in the popular seaside town of Portrush on the North Coast.

It will be the first hotel outside of Belfast for the family owned group which currently operates five hotels in the city including a Holiday Inn Express, Holiday Inn, two Ibis Hotels and the Crown Plaza, which in total provide around 700 beds.

It also has a sixth hotel in Belfast under development – a new Hampton by Hilton Hotel located in Hope Street, which is scheduled to open this spring.

For its first major hotel investment outside of the city Andras House wants to develop an 87-bedroom boutique hotel located on the site of the former Londonderry Hotel on Main Street and Atlantic Avenue in Portrush.

There have been a number of hotels on the same site since 1895.

Rajesh Rana, director, Andras Hotels, said the company had a vision to bring the historic site back to life as a hotel and help to regenerate the town centre.

“We are excited to be able to restore these important listed buildings, and the proposals will pay homage to the site’s architectural heritage by preserving the buildings on Main Street and their important architectural details.”