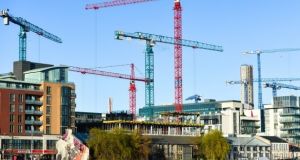 Despite activity returning to growth at the end of the second quarter, firms continued to lower their staffing levels

The latest Ulster Bank construction index posted 51.9 in June surpassing the 50 mark for the first time in three months. Any reading above 50 signals an increase in activity versus the previous month.

Overall activity was up sharply from May when the reading was just 19.9, with commercial activity at 55.8.

Civil engineering activity decreased during June but at a much softer pace than earlier in the year.

Despite activity returning to growth at the end of the second quarter, firms continued to lower their staffing levels amid relatively low workloads. Employment levels fell sharply, albeit at a reduced rate.

“While new business and employment both remained in contraction territory, Simon Barry, chief economist at Ulster Bank, predicted that expansion will likely return as confidence among construction firms grows.

“Firms reported a positive year ahead outlook for the first time in four months as over 39 per cent of respondents anticipate higher output levels in the coming 12 months - a notable improvement from the recent low point in March when activity expansion was expected by fewer than 17 per cent of firms,” he said.