Property prices rebound in May in biggest monthly rise since 2015

Sales prices lower than May 2019 but rental increased in the year, Daft.ie reports 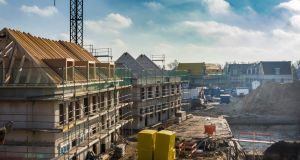 Data from property website Daft.ie shows sale prices rose by an average of 3.7 per cent in May, in contrast to a 5.5 per cent fall in April. Photograph: iStock

Property prices staged a minor rebound in May having fallen sharply the previous month, while the stock of rental properties available in the month continued to rise as the Covid-19 crisis all but shut off the tourism tap.

The latest data from property website Daft.ie showed that sale prices rose by an average of 3.7 per cent in May, in contrast to a 5.5 per cent fall in April. However, the average listed sales price of homes was still 1.6 per cent lower than a year ago, coming in at €245,545.

The substantial rise in May was the biggest one-month increase since early 2015, following April’s fall which was the largest on record. Daft noted that more rural areas saw greater volatility while Dublin prices fell by an average of 1 per cent in both April and May.

Except in Leinster, excluding Dublin, sales prices are now lower than they were in May 2019 with figures in Munster down 5.7 per cent.

In the rental market, despite the substantial increase in stock, the average monthly rent across the State was €1,398 in May, 0.7 per cent higher than in the same month last year. Rents in Dublin were virtually unchanged while rent prices in Connacht and Ulster were 1.7 per cent lower.

Nevertheless, the number of homes available to rent continued to rise, up 6 per cent in May compared to the same month last year. “That hides a big difference between Dublin, where rental listings were up 40 per cent, and the rest of the country, where listings were down,” said Trinity College Dublin economist and author of the Daft report Ronan Lyons.

“The latest figures from the housing market show clear differences in how sale and rental markets are responding,” he added.

Mr Lyons said that May’s rebound tells us more about April’s swift decline. “It is less about the market finding a new level – although of course that may still happen, depending on how Covid-19 affects the real economy . . . not that May was a return to normality in the market.”

“As the country opens up again, over June and July, there will be time to assess the economic damage – in particular the damage that lasts beyond the lockdown. The greater that damage is, the more likely it is that both sale and rental markets will indeed seek out a new lower price level in the months ahead.”