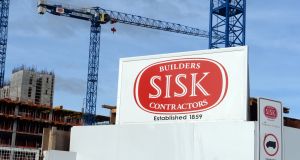 The Republic accounted for the majority of group turnover at €727.8 million. Photograph: Cyril Byrne

The holding company of construction group Sisk grew turnover to almost €1.4 billion last year, a rise of 19 per cent.

Sicon Limited, the parent group of Sisk’s construction activities in Ireland, the UK and several international markets, said profit before interest and tax rose almost 10 per cent to €31.1 million. The group had €184 million in cash at the end of the year and no bank loans.

The Republic accounted for the majority of group turnover at €727.8 million. Turnover in the UK, however, rose by 33.5 per cent in the year to €527 million. Europe accounted for more than €140 million of turnover.

Projects in which the company was involved during the year included the Center Parcs development in Longford, a spectator stand at the Curragh, a production facility for Johnson & Johnson, and Facebook’s new office development in Ballsbridge.

The company, which employed an average of 1,735 people during the year, said it was too early to “accurately gauge the precise impact” of the Covid-19 pandemic and social distancing measures. However, it said it had a “strong order book of secured work” for both this year and next.

“At this time, we estimate that the main financial impact of Covid-19 will be to defer some revenues from 2020 into 2021 due to the temporary closure and/or slowdown of live construction projects, particularly in the Irish market.”