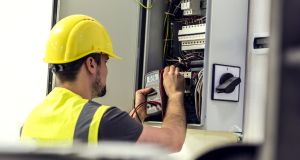 The ruling by Justice Simons means all three sectoral employment orders made by the last government are no longer valid. They governed conditions for building workers, plumbers and electricians

A law setting minimum pay and pension contributions for electricians would have forced smaller contractors to lay off workers, one company warned at the weekend.

The High Court last week struck down part of the Industrial Relations Act, 2015, which allows the government to make sectoral employment orders, determining conditions in building and related industries, as it was unconstitutional.

John Smith, chief executive of National Electrical Contractors Ireland (NECI), said the business which he runs with his brothers, Smiths of Wicklow, would have had to “lay off people” if it had been forced to comply with a sectoral order covering his industry.

Mr Smith added that thousands of small and medium-sized contractors like his, based mainly outside Dublin, would have been forced to do the same.

The NECI challenged a sectoral employment order covering electrical contractors, made by former minister of state for employment Pat Breen, on foot of a Labour Court recommendation.

This set electricians’ pay at between €23.49 and €24.34 an hour, depending on service, and also determined the contributions that these workers and their employers should make to a builders’ pension fund.

After hearing the NECI’s challenge, Mr Justice Garrett Simons struck down chapter three of the 2015 Act, which sets out how sectoral employment orders are made, as it allowed the Minister to make law, a function reserved by the Constitution solely for the Oireachtas, that is the Dáil and Seanad.

Mr Smith’s business employs five electricians and four apprentices. He pointed out that the law removed the company’s ability to negotiate terms with its own staff. “It didn’t give us the flexibility to manoeuvre through whatever the economy throws at us.”

His company works mainly at installing and maintaining electrical equipment and fittings in homes. It competes with sole traders, who are not bound by the order. Mr Smith noted that most smaller contractors were in the same boat.

“We do a lot of maintenance for residential people, our major competitors are one-man bands, we could never sustain that,” he said.

He also pointed out that his business allowed workers greater flexibility on hours than larger operations, giving staff time to deal with family responsibilities such as childcare.

Mr Smith said the contractors that supported the sectoral employment order in the first place were mainly big players, based in Dublin, which worked on big projects, often for multinationals.

Mr Justice Simons’ ruling means that all three sectoral employment orders made by the last government, which govern conditions for building workers, plumbers and electricians, are no longer valid.

Office space take up falls to levels not seen since 2013