Homebuilder is currently building on nine sites which will deliver 3,250 new homes 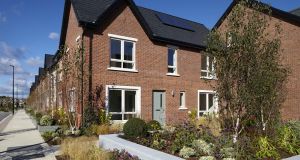 Cairn’s Parkside development on the Malahide Road in Dublin.

Cairn Homes’ profit surged 191 per cent for the first half of the year as the homebuilder sold almost as many units in the period as it did for 2016 as a whole and disposed of some unwanted development land.

Gross profit for the first half came to €7.7 million, up €5.1 million on the same period last year, as the company completed 94 sales and revealed it had forward sales on 474 units in place.

Revenues for the first six months of the year increased by 157 per cent to €41.2 million, beating stockbroker Davy’s €31.1 million forecast. This was largely as a result of the builder raising €14.1 million from the sale of non-core smaller development sites.

“We’re currently building on nine sites which will deliver 3,250 new homes,” said chief executive Michael Stanley said in a statement alongside the publication of the interim results. “The quality of our land bank and range of houses and apartments are meeting the needs of distinct segments of the market from first-time buyers to people trading up or downsizing.”

Cairn Homes, which two years ago became the first Irish housebuilder to float in almost two decades, aims to ramp up home sales from 105 last year to 1,200 in 2019.

The company has raised more than €720 million in a little over two years, including its initial public offering (IPO) and tapping shareholders to fund major asset purchase including a portfolio of residential development loans in 2016 and a prime 8.64 acre site on broadcaster RTE’s Montrose campus in Donnybrook in Dublin.

Cairn plans to build 500 apartments and 10 houses on the site, which it purchase in July for €107.5 million, 43 per cent above the guide price.

The company, which originally floated in London in June of 2015, joined the Irish Stock Exchange in July.

While the average price of unit sales completed in the first half of the year was just over €280,000, according to Davy calculations, the forward sales average €397,000. The increase is down to sales at the company’s luxurious apartments scheme, called Marianella, in Rathgar in the heart of Dublin 6.

By contrast, starting prices at the likes of its Shackleton Park housing development in Lucan are under €300,000.

“Given the stage of Cairn’s business development, and the lack of comparables for first-half 2016, we are more interested in the company’s comments and figures on demand levels at its active sites than the bare financials,” said Investec analysts in a note.

“The level of forward sales continues to be impressive; this figure has increased from 301 units on 9th March to 474 currently and now encompasses sales at five sites, including 110 units at Cairn’s high-end development at Marianella. Strong demand at this site augers well for the flagship RTE site, which is of a similar profile to Marianella.”

1 Volvo warns of scaled back car line-up if UK splits from EU rules
2 NI house builder apologises to Harry and Meghan over adverts
3 Opioid executive admits to ‘no morals’ ahead of prison term
4 Are there annual limits on inheritances or gifts to a child?
5 Who are Ireland’s 17 billionaires?
6 Little strategic thinking in election manifestos of Fine Gael and Fianna Fáil
7 US threatens retaliation against EU over proposed carbon tax
8 My father in a nursing home wants to gift me his house
9 CPL founders Anne Heraty and Paul Carroll in line for €1m dividend payout
10 South Dublin Credit Union members urged to borrow more to ensure survival
Real news has value SUBSCRIBE