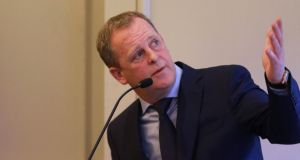 Michael Stanley, chief executive of Cairn Homes, said recruiting apprentices was important and the company had a support programme for sub-contractors that did this. Photograph: Nick Bradshaw

Builder Cairn Homes is in the final round of talks to sell an apartment block in a single deal that could be worth more than €100 million, its chief executive, Michael Stanley, confirmed on Wednesday.

Cairn last year said it planned to sell a block of 120 apartments which the listed company is building on Dublin’s Hanover Quay to a single buyer rather than individually.

Speaking after its annual general meeting, Mr Stanley said Cairn’s agents were in talks with five prospective buyers that had tabled final bids for the property, which sources estimate could fetch €105 million.

He added that the company hoped a deal could be agreed within four to six weeks “with a view to closing around the end of this year or early next year”.

According to reports, final bidders include institutional landlords and property players such as Irish Residential Properties Real Estate Investment Trust, Kennedy Wilson and Hines from the US, and German fund Patrizia Immobilien.

Mr Stanley noted that talks were at a sensitive stage and would not confirm the names of any bidders but said that Hanover Quay drew interest from a mix of Irish and international buyers.

“We had 16 people in the data room; that’s down to five strong parties in the final round,” he added.

Cairn bought Hanover Quay for €22 million and the cost of building there – work will finish this year – is about €40 million. A total spend of €62 million implies a profit of €40 million-plus.

Along with its 120 dwellings, the development on Dublin’s Grand Canal Dock will have space for a gym and restaurant. Its value is based on selling prices of up to €900,000 for apartments and the extra facilities.

Asked if an emerging shortage of skilled workers – highlighted in a Dublin Institute of Technology report for the Construction Industry Federation – was hindering growth, Mr Stanley said it was not an immediate problem, but could hit in the future. “We do not see it as a primary constraint,” he said.

He acknowledged that recruiting apprentices, something called for in the report, was important and said Cairn had a support programme for sub-contractors that did this.

Mr Stanley also said planning law changes that “fast-tracked” applications for projects with 100 new homes or more were having an impact.

Shareholders passed all resolutions at Cairn’s annual general meeting in Dublin on Wednesday.