Architects linked to RDS and Curragh projects go into liquidation 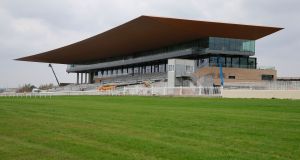 Newenham Mulligan’s association with the newly rebuilt Curragh grandstand (above) and the proposed redevelopment of the RDS arena, which hosts Leinster rugby home games and the Dublin Horse Show, put the firm in the spotlight recently

Newenham Mulligan, the architect company linked with the high-profile rebuilding of the RDS arena and the Curragh Racecourse stand, is being wound up.

Dublin- and Limerick-based Newenham Mulligan and Associates Ltd has confirmed that it is going into liquidation.

“The company is committed to an orderly winding-down of its affairs and a creditors’ meeting will be held in the coming weeks,” a statement said.

The architects’ firm added that it would not be making any further comment beyond that statement.

Efforts to contact director Thomas Mulligan were not successful on Tuesday. The most recent figures show that the company employed 20 people in 2017.

Newenham Mulligan’s association with the newly rebuilt Curragh grandstand and the proposed redevelopment of the RDS arena, which hosts Leinster rugby home games and the Dublin Horse Show, put the firm in the spotlight recently.

The Irish company acted as a local agent for London-headquartered multinational architects firm Grimshaw, which designed both structures. It is understood that neither the Curragh nor the RDS have any exposure to Newenham Mulligan’s liquidation.

Bank of Ireland recently took a charge over Newenham Mulligan’s assets as security for a debt, according to filings with the Companies’ Registration Office.

The move allows the lender to take control of the company’s assets to recover its debt should Newenham Mulligan fail to repay the money or abide by the terms of its credit agreement.

It also means that Bank of Ireland will be entitled to collect what is due to it ahead of unsecured creditors such as suppliers when a liquidator cashes in the company’s assets and distributes the proceeds to creditors.

Earlier filings show that the bank also has a mortgage over a Newenham Mulligan property at 5 Steamboat Quay, Limerick. The company’s Limerick office is at 3 Steamboat Quay.

Newenham Mulligan’s accounts for 2017, the last year for which figures are available, show that Bank of Ireland held a letter of guarantee for €300,000 for the company’s loans and overdraft.

The company’s operations generated a €12,700 profit in 2017, according to those accounts.

The fact that Newenham Mulligan intends calling a creditors’ meeting indicates that the liquidation will be a “creditors’ voluntary”, where those to whom the company owes money elect the liquidator.

Normally company directors nominate a liquidator in these situations, but creditors are entitled to oppose the nominee and elect someone else if they choose.