Former Heinz chief executive seeking to have insolvency recognised in US 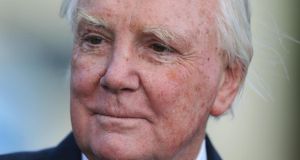 Sir Anthony O’Reilly, who was declared bankrupt in the Bahamas in 2015, is trying to have his insolvent status rubber-stamped by a Pittsburgh court. Photograph: Inpho

A US bankruptcy court has given former Heinz chief executive Sir Anthony O’Reilly and his former personal nurse Sabina Vidunas until next Tuesday, June 11th, to come up with a way forward through mediation, in proceedings taken by Sir Anthony to have his Bahamas insolvency recognised in the US.

Sir Anthony, who was declared bankrupt in the Bahamas in 2015, is trying to have his insolvent status rubber-stamped by a Pittsburgh court, which would stymie a long-running US civil case taken against him by Ms Vidunas.

She has filed a lawsuit alleging he reneged on a deal to give her $40 million (€36 million) worth of shares, in proceedings currently on hold pending the bankruptcy wrangle.

A bankruptcy court in Pittsburgh last month delayed a decision on Sir Anthony’s recognition application and the judge implored both sides to “have another stab” at mediation to forge a way ahead.

Following a hearing on Tuesday in Pittsburgh attended by lawyers for Sir Anthony and Ms Vidunas, a memo was filed by the court with a handwritten note saying “the parties are to submit a proposed mediation order” by next Tuesday.

In her stalled civil case, Ms Vidunas has alleged that she performed duties for Mr O’Reilly that were “repugnant”. The full details of her allegations, however, are obscured from public view in files that were sealed by the court until 2037.

Sir Anthony and Ms Vidunas are also involved in a third legal scrap over the ownership of a property in the Bahamas which she alleges was gifted by to her, but which he alleges was bought by her with a loan from him that has not been paid back.

1 Ireland has fifth-largest number of billionaires per capita in the world, says Oxfam
2 Chris Johns: Ireland risks populist culture war over property and pensions
3 Barclays to cut 100 senior roles as lender seeks to rein in costs
4 State-backed Finance Ireland weighs stock market flotation in 2020
5 Irish rents see second-highest increase in the EU since 2007
6 PTSB finance and operations executives vie for chief executive job
7 ‘The only time I saved money was some coins in my first piggy bank’
8 Companies should not use the climate crisis as a scapegoat
9 Inbreeding poses major threat to Ireland’s thoroughbred horse sector
10 Phil Hogan to address business leaders at IDA event at Davos
Real news has value SUBSCRIBE