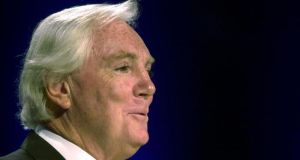 Lonestar, the Dallas-based private equity firm led by John Grayken that bought an IBRC loan portfolio with a face value of €1 billion, has started to engage with its debtors, which include Sir Anthony O’Reilly. Lonestar is understood to have contacted Sir Anthony, whose investment vehicle Indexia and other firms owed the bank about €35 million.

Borrowings
His debt to IBRC was originally €60 million but this was reduced by money he made from selling his shares in Landis+Gyr, a smart metering firm once led by his son Cameron O’Reilly. O’Reilly’s borrowings are secured in part on shares in Independent News & Media and Providence Resources, the exploration company led by his son Tony O’Reilly jnr. Sir Anthony declined to comment.

Sir Anthony has other debts to ACC, AIB and Bank of Ireland and his assets also include fine art and property. He is married to Chryss Goulandris, a successful and wealthy businesswoman in her own right. Sir Anthony’s brother-in-law Peter Goulandris refinanced his own borrowings with the former Anglo Irish Bank some time ago.

Lonestar has also begun to engage with other borrowers in its portfolio. Hickey’s Pharmacy Group, which has debts of €45 million, has teamed up with AIB to try to buy out its loans. Repayment plans for loans acquired by Lonestar are also being looked at by the American private equity firm.