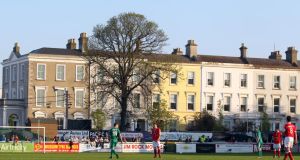 Bray Wanderers Carlisle grounds in Bray, Co Wicklow: a case involving a dispute with three men and the running of the club has been settled. Photograph: James Crombie

A legal action by the owners of Bray Wanderers FC against three individuals arising from a dispute over the running of the soccer club has been resolved.

When the matter returned before the court yesterday, the judge was told, following discussions between the parties, the injunction proceedings were not going ahead as the three defendants were prepared to give a number of undertakings.

The three agreed not to trespass on the grounds without prior arrangement, although they may attend football matches and other public events without prior engagement and authorisation.

They also agreed not to publish any information purporting to be official information from the club company.

They further agreed not to misrepresent or impersonate directors of the company, claim to act in an official capacity or call official meetings of the club.

Mr Deering also agreed to delete all data in his possession obtained through accessing the company’s email account server and website system.

Brian Conway, for the three men, said they were happy to consent to the undertakings.

As part of the company’s claim, it had been alleged Mr Deering filed official papers with the Companies Registration Office which purported to record the removal of four directors of Bray Wanderers Ltd and the appointment of Mr Deering as director.

Counsel said his client wants to have those filings annulled, and the status quo restored.

Mr Deering, Kilgobbin Road, Stepaside, Dublin, is a former director and a small shareholder in the company (with a 2.26 per cent shareholding). Mr Quigley, Charlesland Wood, Charlesland, Greystones, Co Wicklow, and Mr Lennon, Mill Meadows, Arklow, Co Wicklow, were in dispute with the club over money they claimed to be owed.

Last week, when seeking the injunction, the company said it had no option due to the alleged actions of the three individuals, including allegedly putting a recent league match against Derry City in jeopardy. That game did proceed.

It was claimed Mr Deering represented himself as a director and said he was taking charge of the club’s affairs and had purported to organise official meetings of the club.

The company argued that Mr Deering was not a director and had no authority to take charge.

The judge gave both sides liberty to return to court should the need arise.

1 Oxford Covid vaccine trials offer hope for elderly
2 Ulster Bank to introduce new card payment controls on app
3 Hurrah for the companies giving staff more time off
4 How much state pension will I get next year?
5 Sustainable investment: How your pension can help tackle climate change
6 RTÉ to seek 70 voluntary redundancies as ‘large costs’ beckon in 2021
7 Apple planning updates to its AirPods earbuds next year
8 Some Irish money market funds came close to danger in March
9 How long can Government afford to keep State pension age at 66?
10 Aryzta to pursue asset sales as takeover talks fail
Real news has value SUBSCRIBE