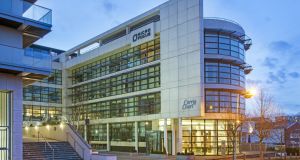 Corrig Court, Sandyford, Dublin 18: if sold separately, the property will go on sale for €12.3 million

Two office buildings in Sandyford, Dublin 18, bought three years ago for €15 million are back on the market for more than €23.8 million after being upgraded and let to a range of tenants.

The mark-up underlines the sharp recovery now under way in the suburban office market following the huge success of the office letting programme in the inner city and the docklands in particular.

Joint agents Savills and QRE will offer the two blocks for sale in one or two lots on behalf of McGarrell Reilly Group, which spent about €15 million on acquiring them in difficult trading conditions during 2015.

The building has future expansion potential, subject to planning permission, having previously had approval for an additional penthouse floor

Over the past two years, the increasingly high office occupancy costs in the city centre have triggered a shift in demand to the suburbs, where costs are now typically up to 50 per cent lower than the city centre. The expectation now is that prime rental levels in areas such as Sandyford will exceed €30 per sq ft in 2019.

Currently there is only 26,012sq m (280,000sq ft) of new space under construction in south Dublin. These buildings, as well as future developments, are expected to accommodate single large-scale occupancy requirements.

Corrig Court is fully occupied and produces a rent of €907,660 from a tenant line-up that includes Cubic Telecom, BSI Cybersecurity and Information Resilience and Micro Focus. The average passing rent of €21.50 per sq ft has strong revisionary potential based on the most recent letting to Truata in Silverstone House, along with other strong rent review evidence of €25 per sq ft.

The building has future expansion potential, subject to planning permission, having previously had approval for an additional penthouse floor.

Silverstone House is fully let to top-rate tenants, including the Health Service Executive, Truata, Sherry FitzGerald and O’Dwyer Property Management, at an overall rent roll of €812,723. The most recent letting to Truata, a data analytics firm set up by MasterCard and IBM, was agreed at €24.50 per sq ft, setting a strong benchmark for rentals in the area.