Plaza development in Tallaght for sale for €15m 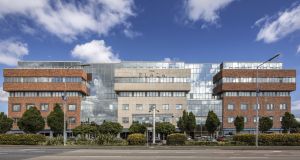 The Plaza, Tallaght, Dublin 24, goes on sale today on the instructions of Nama for €15 million. Photograph: Gareth Byrne

A mixed-use development in Tallaght, Dublin 24, goes on sale today on the instructions of Nama at an asking price of €15 million. Adrian Trueick of agent Knight Frank is handling the sale of the hotel, office and retail facilities, which have an unusually high vacancy rate of more than 60 per cent.

Declan Taite of receivers Duff & Phelps is advising Nama on The Plaza, a six-storey over-double basement block completed in 1999 with a 122-bedroom hotel, three floors of offices, and three ground-floor retail units.

The property has a gross internal area of 18,652sq m (200,770sq ft) and more than 200 car-parking spaces in the double basement and at surface level. The hotel is currently vacant and includes banqueting and meeting rooms as well as food and beverage facilities.

The office accommodations are laid out over the first, fourth and fifth floors and extends to 7,199sq m (77,490sq ft). Two of the floors are let to the Office of Public Works under long-term leases at a rent of €540,200. The fifth floor is vacant and might well end up in residential use, subject to planning permission. Rents from two units occupied by Low Price Supermarkets and Fitzpatrick Club brings the overall rental income up to €652,350.

According to Trueick, if the available office space (2,198sq m/23,666 sq ft) is refurbished it could be let at €15 to €18 per sq ft. There is also scope to upgrade the hotel facilities, including recommissioning the nightclub, restaurant and function room.

He said that while a previous planning application for an additional 77 hotel bedrooms and 97 apartments was refused permission, there may now be potential for the same extension following the recent planning changes dealing with height and density close to key transport routes.