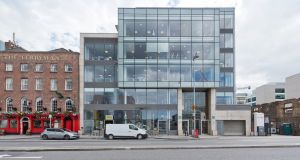 UnityTechnologies’ new offices will be located on part of the first floor at No 33 Sir John Rogerson’s Quay, Dublin 2

Unity Technologies, which recently acquired Irish software company Artomatix, in a deal valued at up to $60 million (€52.8 million), has secured a new office in Dublin’s south docklands to facilitate the expansion of its workforce.

Agent Cushman & Wakefield is understood to have advised the company on its decision to enter into an agreement with leading law firm Dillon Eustace for 7,765sq ft of space on the first floor of its headquarters at number 33 Sir John Rogerson’s Quay.

Unity Technologies has taken a three-year lease with a break option at the end of year two and is set to pay a rent of about €65 per sq ft. Commercial property consultant Michael Turley is understood to have advised Dillon Eustace on the subletting. Number 33 Sir John Rogerson’s Quay is owned by the Irish property company, Iput.

The agreement of the lease will allow Unity and the newly-acquired Artomatix to increase employee numbers substantially. Artomatix, which currently employs just over 20 people intends to immediately triple its headcount, with other Unity divisions also planning to take on staff locally. All told, Unity intends to create 100 jobs in Dublin over the next two years.

Unity Technologies has developed a 3D video-gaming engine which is used to develop titles for mobile, VR, AR and traditional consoles. Apps made with Unity were installed more than 37 billion times in 2019. The company has more than 3,200 employees spread across 43 offices in 17 countries. It acquired Artomatix in a deal first announced in The Irish Times in late December but which has only recently been confirmed.

Artomatix has developed artificial intelligence (AI) software technology known as ArtEngine, that significantly cuts the cost of content creation for animated movies, video games and AR/VR applications through automation. The technology gives 3D artists the ability to speed up their workflow thanks to algorithms that can generate thousands of images based on the initial design and parameters that an artist provides.