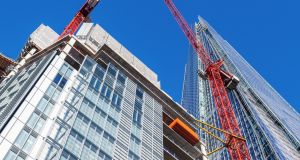 A wave of UK property funds halted trading in the past week, trapping billions of pounds of investments.

New Ireland moved on Friday to restrict investors from taking money out of its flagship €1.34 billion property fund and two other real-estate funds for up to six months as economic chaos caused by the Covid-19 pandemic has made it difficult to value the assets in the portfolios.

The move comes a day after Irish Life and Zurich Life were forced to temporarily pull up the shutters on withdrawals after experiencing a spike in outflows as investors sought to get their hands on cash and worried about the medium-term prospects for the international property market.

A wave of UK property funds halted trading in the past week, trapping billions of pounds of investments – evoking memories of when funds were forced to impose restrictions en masse following the Brexit referendum in 2016.

This has restarted a debate over whether open-ended funds, which allow for new contributions and withdrawals from investors on a continual basis, should be allowed for assets like property, which can take months to sell.

In the US and Germany, for example, funds that invest in illiquid assets such as property are restricted from offering daily withdrawals without forcing a penalty in investors.

New Ireland informed brokers on Friday that it has been advised by State Street Global Advisers (SSGA), which manages its property funds, that independent valuations of property in portfolios will include a so-called material uncertainty clause with immediate effect.

“Because of the material uncertainty on property values, the unit price of the funds on any day will not be based on reliable property values,” the New Ireland notification said. “Allowing trading to continue when this is the case could adversely impact existing and new investors and it is for this reason that investments in and redemptions from the fund are being deferred for all instructions received after Friday 20th March 2020.”

New Ireland said that it aims to remove the restrictions “as soon as reliable values are available”, with the maximum period set at six months.

The firm had already been experiencing outflows from its New Ireland Property Fund in recent times, triggering a move by it in the past week to move revalue the portfolio from an “acquisition basis” to a “disposal basis”. This resulted in an automatic 7.9 per cent drop in the value of the fund

Meanwhile, Zurich Life imposed a temporary suspension on withdrawals from its Zurich Property Fund from Friday with no specified time limit.