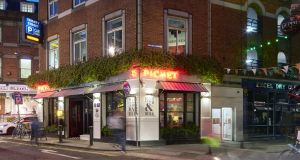 The best-positioned retail units in the Trinity Street car park complex are let to Pichet restaurant and Excel Dry Cleaners.

The exceptionally busy Trinity Street car park off Dame Street in Dublin’s south inner city, three retail units and four office suites are to be offered for sale through agents CBRE for more than €17.3 million.

At that valuation, the complex will show an initial return of 4.9 per cent after allowing for standard purchasing costs – including the new 6 per cent stamp duty.

The Trinity Street complex was originally funded with the aid of a 10-year tax break, then available to encourage the development of high rise car parks in the city.

The 1994 investment was sold six years after opening to Firstwood Partnership, a five-man consortium headed by broadcaster Gay Byrne, senior counsel Anthony Kidney, solicitors Eric Brunker and Stephen Hamilton, and Dermot Murphy of Clonskeagh Motors. The group is now gearing up to offload the entire property.

The complex has been managed from the start by a company controlled by Veronica and Michelle Gallagher, who sublet the retail and office accommodation to third parties. The best-positioned retail units are let to Pichet restaurant and Excel Dry Cleaners.

The 171-space car park is one of the busiest in the city because it is well-positioned to serve the Grafton Street area, as well as Temple Bar. The popularity of the car park has allowed the operators to charge one of the highest parking rates in the city: €4 per hour.

The three ground-floor retail units, extending to 490sq m (5,275sq ft), and the car park were developed on a site previously occupied by the Moira Hotel. The four self-contained office units on the upper floor have a combined floor area of 191sq m (2,060sq ft).

The car park is accessed from both Exchequer and Dame Streets and comes on the market at a particularly busy time for the immediate area. There are advanced plans to redevelop the adjoining St Andrew’s Lane Theatre as a budget hotel and to sell the substantial Eir site behind Fallon & Byrne, which is expected to attract a huge response from developers.

Willie Norse of CBRE, who is handling the sale of the car park and the integrated retail and office premises, expects strong interest from traditional investors and specialist car park-related funds because of the 11-plus years on the lease and the popularity of the car park.