Three properties on Castle Market and Drury Street for €2.8m-plus 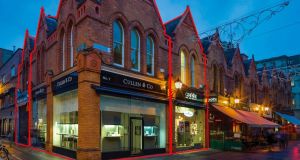 Cullen & Co: the jeweller is one of three properties that make up the portfolio for sale

The portfolio is expected to sell for a figure in excess of the €2.8 million guide price, reflecting a return of between 4.5 and 5.1 per cent.

Institutional investors, meanwhile, seem content with Grafton Street yields between 3 and 4 per cent, though the €9 million guide price for the Molton Brown store next to Bewley’s could well keep this investment at around 2.8 per cent because an obvious reversionary opportunity in the next two years will increase the yield to more than 4 per cent.

Ben Pearson of Agar says he expects strong bidding on the three stores: Cullen & Co Jewellers, which has dual frontage on to Castle Market and Drury Street; the adjoining Nail & Beauty Salon at 6 Castle Market; and Blazing Salads on the opposite side of the jewellery store at 42 Drury Street.

The three business premises will be sold by tender in one or more lots on December 6th. In addition to the €2.8 million quoted for all three properties, Agar is also guiding €2.1 million for the jewellery shop and the salon. The guide for Blazing Salads is €780,000-plus.

Cullen and Nail & Beauty are among 11 businesses on Castle Market, which has been pedestrianised for years. The Victorian enclave and most adjoining streets are regularly crowded because of the large number of bars and restaurants in the area and the desire by young professionals to socialise here rather than in the busier Temple Bar.

The appeal of so many restaurants between Grafton and South Great George’s streets could be strengthened if, as expected, Dunnes Stores secures permission to change its homewares store on George’s Street into two large restaurants.

On the opposite side of Castle Market, plans are proceeding for the pedestrianisation of College Green and the redevelopment of parts of the Central Bank into a number of restaurants, bars and retail outlets.