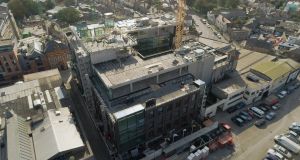 We are now in the final month of what has been a very disrupted year for the office market. We started out with a healthy carryover of activity from 2019, and expectations were for an equally-buoyant year of office leasing activity in Dublin and in regional cities. The onset of Covid-19 had an immediate impact on the office sector from mid-March onwards, with office workers forced to work remotely once the country went into full lockdown. Although initially we thought this disruption would last for six weeks, some office occupiers haven’t been back to their office buildings since.

The pandemic and the Government’s response to it created huge uncertainty and understandably many organisations put office expansion and relocation plans on hold while they focused on their core businesses. With transactional activity effectively halted during this initial lockdown, it was no surprise that Q2 was the worst quarter on record for the Dublin office market in terms of take-up - in stark contrast to the bumper Q1 that had been experienced due to the carryover of 2019’s transactional activity. Supported, in the main, by activity driven by lease events, total take-up in the Dublin market reached more than 130,000sq m in the first nine months of 2020. There is currently more than 30,000sq m reserved but even if all of this stock signs by year-end, annual office take-up in the capital will be considerably lower than in recent years. This trend mirrors office markets all over the world as the future of the office has come into question.

While I firmly believe that offices have a definite future, the likelihood is that most organisations will now embrace a more blended approach to occupation, allowing staff to work remotely at least part of the time.

While many organisations were already embracing the benefits of flexible working well before this year, the pandemic, to some extent, accelerated trends that were already in evidence. While I firmly believe that offices have a definite future, the likelihood is that most organisations will now embrace a more blended approach to occupation, allowing staff to work remotely at least part of the time. This will look different for every organisation. Clearly office occupiers that occupy modern buildings that allow for different configurations and use of space will fare best in this new paradigm. Until such time as employers get their staff back to their offices in 2021 and establish what their specific requirements will be, most will put off making longer term leasing commitments. As a result, office take-up is likely to remain constrained until at least the second half of 2021. There has been a notable improvement in enquiries and building inspections since the announcement of vaccines in recent weeks, which bodes well.

The overall rate of vacancy stood at 8.64 per cent at the end of September and is expected to increase further in Q4

We have observed increased demand for flexible accommodation and where tenants are committing to long leases, they are invariably looking to incorporate break clauses and more flexibility. Although new supply continues to come on stream in a measured way, one of the more noticeable trends over recent months is an increase in so-called ‘grey space’ as companies seek to sublet or assign excess accommodation. Indeed, the volume of ‘grey space’ being marketed has increased by 65 per cent since the onset of Covid. The overall rate of vacancy stood at 8.64 per cent at the end of September and is expected to increase further in Q4. As a result, high-quality secondary accommodation is now competing directly with newly-built stock. Against this backdrop, it is no surprise that there has been some softening in headline quoting rents albeit the magnitude of decline is marginal compared to the very sharp correction in rental values that occurred following the Global Financial Crisis. As opposed to a dramatic fluctuation in rental values, we are more likely to see more generous incentives and greater flexibility being built into office leases for the foreseeable future.

Marie Hunt is executive director and head of research at CBRE Ireland.

7 ‘I love the place’: US billionaire John Malone on his €300m Irish portfolio

9 Tax break for screen industry should be broadened, sector says