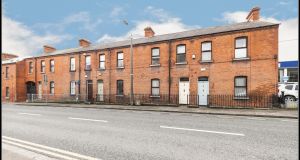 Three pre-1963 houses in Stoneybatter that have been converted into 12 apartments along with a ready-to-go infill site to the rear for four more apartments is quoting €3 million through agent Robert Colleran.

The properties, at 88-92a Prussia Street, are beside a large garage site bought by Marlet that has permission for a 203-bed student accommodation building.

There are other student accommodation schemes either under construction or planned for this part of Dublin, which is close to DIT’s Grangegorman campus, where 20,000 students will eventually study.

The three properties for sale are two-storey terraced houses with four self-contained apartments in each. These units are separately metered for electricity and have their own kitchens, bathrooms and bedrooms.

All the units are rented out on a short-term basis to produce a rent roll of €135,000. The agent suggests refurbishing some of the units when they become vacant could increase the rental income. Rents in this part of the city have risen strongly in recent years, with an influx of young professionals to the area.

Entrance to the rear infill site is via a laneway at No 92a, which leads to an enclosed yard of about 106sq m (0.026 acres). Permission has been obtained for a small block of two two-beds and two one-beds on this site. These could increase the rent roll by a further €84,000.

This part of Dublin 7 is within walking distance of the Luas at Smithfield, while a number of bus routes pass nearby Manor Street. There is also a good selection of shops and pubs within easy reach.