Caution sounded over whether this is ‘any form of bounce back’ 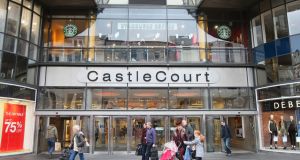 Overall, the survey shows that retailers in the North welcomed a 0.5 per cent increase in shopper figures last month, with high streets and retail parks both enjoying the biggest footfall jump of 2.2 per cent.

There were more shoppers on the North’s streets last month than there had been at any other time in the past 12 months, new retail figures show.

Consumers flocked back to the high street during May delivering a 2.2 per cent jump in footfall figures. This is the strongest growth recorded since the previous May, according to figures from the Northern Ireland Retail Consortium (NIRC)/Springboard Monitor.

Overall it shows that retailers in the North welcomed a 0.5 per cent increase in shopper figures last month, with high streets and retail parks both enjoying the biggest footfall jump of 2.2 per cent.

But Diane Wehrle, director of retail insights company Springboard, has cautioned that it would be premature to consider the overall improvement in the North’s footfall last month as “any form of bounce back”.

Ms Wehrle said it was more likely to be a “consequence of shopping trips being deferred from April, when the weather continued to be cold and wet, into May”.

“It might also be regarded as a reflection of consumer demand resulting from the two May bank holidays which anchored the month at both ends. In reality, however, footfall actually declined in both bank holiday weeks, reflecting a long-term trend identified by Springboard of the lessening in importance of public holidays for retail,” she added.

The latest NIRC/Springboard Monitor highlights that footfall after 5pm in the North now outperforms activity during traditional retail trading hours.

Ms Wehrle said this underlined that shoppers had moved to “experience over product” and indicated that the number of customers visiting “bricks and mortar stores” would continue to fall.

“In May, footfall between 9am and 5pm in Northern Ireland declined by 3.4 per cent whilst rising by 6.4 per cent post 5pm; and the variance between the two parts of the day is most significant in high streets where daytime footfall was flat at 0.02 per cent compared with a rise of 10.3 per cent post 5pm,” she said.