One of Northern Ireland’s largest ever office transactions completed 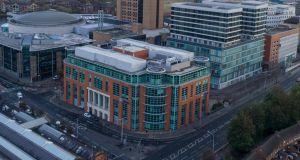 Nine Lanyon Place, one of the most prominent office buildings in Belfast city centre

Causeway Asset Management has agreed to lease 150,000sq ft of Belfast office space in what is one of the largest such transactions ever completed in Northern Ireland.

The asset manager agreed the deal for Nine Lanyon Place, one of the most prominent office buildings in Belfast city centre, with the department of finance’s properties division.

Damian Mitchell, director at Causeway Asset Management, said it had been “working closely” with the department of finance over the past several months to facilitate its requirements.

“This deal provides the [civil service] with the transitional space it needs for workforce consolidation in a prime city centre location,” he said. “We knew when we launched our refurbishment plans for Nine Lanyon Place back in December 2017 that there was significant demand for office space in Belfast city centre.

“Over the last six months we’ve experienced a high level of interest from FDI investors and professional firms who are considering locating to Belfast or expanding their operations here.

“We are delighted to conclude our contract with the [civil service] to lease the building with immediate effect.”

A department of finance spokesman said the lease would allow the public sector to “consolidate operations from various locations across the city ensuring our assets are more efficiently managed and help to realise some significant cost savings”.

Stuart Draffin, director and head of agency at Lambert Smith Hampton, which acted as letting agents on the deal, said it was a “very significant lease”.

“Causeway Asset Management’s willingness to be flexible and work closely with interested parties to provide the space and terms to meet their specific needs was crucial in securing this letting.