Sandyford portfolio for over €20m 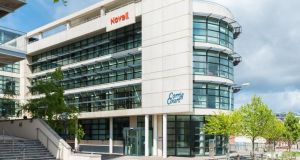 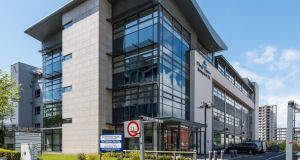 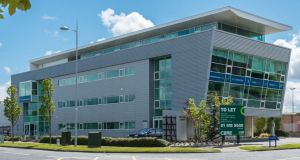 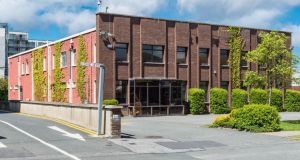 Three modern office blocks and an industrial building with an overall value of more than €20 million in Sandyford Business Park in south Dublin are to be offered for sale from today in one lot or separately.

The four investments being sold by joint agents CBRE and JLL originally figured in loan books acquired by Lone Star. The buildings are now being offered for sale on a consensual basis by the individual owners.

The portfolio is producing a rent roll of around €1.1 million with the potential to increase it to €1.9 million once the vacant space is let and rent reviews are completed. These figures suggest that the current yield of 5.2 per cent could be increased to close to 9 per cent once tenants are found for the vacant space.

The four buildings have an overall floor area of 11,148sq m (120,000sq ft) which might appeal to investment funds looking for a significant foothold in the Sandyford office market.

The collection is well placed to benefit from the strong recovery taking place in the south Dublin office rental market where quoting rents have risen by 15 per cent to more than €215 per sq m (€20 per sq ft) in recent months.

Additionally, the suburbs have accounted for nearly 40 per cent of overall take-up in the first three months of this year. With the office vacancy rate running at only 8 per cent in the south suburbs, office agents are forecasting that the present pace of increase in rents in areas such as Sandyford is likely to continue.

Corrig Court, which adjoins Beacon South Quarter, is currently producing €670,000, but once rent reviews are completed this figure is expected to rise to €790,000.

The detached block has a gross internal floor area of 4,248sq m (45,727sq f) of offices over four floors and 75 parking spaces. The “L” shaped block has 360 degree panoramic views of Dublin Bay, the Dublin Mountains and the surrounding business park. The building is let to Cubic Telecom, Espion and Novell Ireland Software.

Bracken Court at the junction of Blackthorn Road and Bracken Road is only producing €72,000 out of an estimated rental value of €450,000 because of a 55 per cent vacancy rate and temporary rental concessions. The four-storey block extends to 2,867sq m (30,870sq ft) and has 59 parking spaces. The ground and first floors are currently vacant while the remaining space is rented by Prima Management, Irish Welcome Tours and Infinite Technology.

The current rent of €255,000 is expected to rise to €580,000 when the empty space is let, and the rent reviews and lease renewals have taken place. Silverstone has an internal floor area of 3,243sq m (34,911 sq ft) and 52 parking spaces.The two existing tenants are GloHealth Financial Services and O’Dwyer Property Management Ltd.

Grafton House, a single let, detached industrial unit, is also located on Ballymoss Road. The 1,082sq m (11,648sq ft) building is on a site of around half an acre and will likely be replaced by an office building.

It produces a rent of €126,000 a year under a lease which gives both landlord and tenant a rolling break option every October until it expires in 2019. The urban framework plan for the area provides for a plot ration of 1:3 and a building height limit of six storeys.