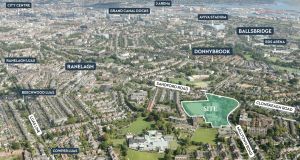 An aerial view of the Sandford Road site. The property is part of the Jesuits’ Milltown Park campus.

An intense competition is in prospect between developers and investors serving Dublin’s prime residential sector with the launch today of a 4.23 hectare (10.46 acres) site in Ranelagh, Dublin 6 to the market.

Agent GVA Donal O’Buachalla is seeking offers in excess of €55 million for the property, which currently forms part of the Jesuit order’s Milltown Park campus, the site being offered for sale includes a number of original period buildings.

Located on Sandford Road the property falls within an area zoned “Z15 - Institutional and Community” in the Dublin City Development Plan 2016 - 2022. This zoning identifies a mix of “permissible uses” and “open for consideration” uses for the site including residential, medical, hotel, educational, community and institutional.

Jack Devlin of GVA Donal O Buachalla says he expects to see “very keen demand” for the Dublin 6 property from leading developers and investors thanks to its compelling offering of a large plot in a prime south city suburban location .

To put the site’s scale in context, it far outstrips the 3.45 hectares (8.64 acres) listed house builder, Cairn Homes, acquired at RTÉ’s Montrose campus in 2017. Cairn paid €107.5 million - or just over €12.4 million per acre - to secure the Donnybrook lands in the face of competing bids from developer Michael O’Flynn, Joe O’Reilly’s Chartered Land and Richard Barrett’s Bartra Capital. Cairn is hoping to deliver between 550 and 600 homes on its Montrose holding subject to securing permission from An Bord Pleanála under the terms of the Government’s fast-track planning application process.

Given its closer proximity to Dublin city centre and position on the edge of the prized residential location of Ranelagh, the Sandford Road site is likely to attract the interest of a wide range of developers, including those parties who pursued the RTÉ lands.

Mr Devlin believes the subject property’s potential will most likely be realised with the delivery of a mixed-use scheme of houses and apartments in a parkland setting alongside the existing period buildings, which he says could be redeveloped for complementary uses such as hotel, medical, educational, or institutional. By way of illustration, he cites the nearby Mount St Anne’s development as an example of the successful refurbishment and conversion of period ecclesiastical buildings for modern use.

Located just a short distance from Ranelagh village, the site has extensive frontage on to Sandford Road and Milltown Road. The property is bounded by woodlands, while its central portion is largely-undeveloped open space. The period buildings included in the sale occupy the south-eastern corner of the site, and have a combined area of 7,450sq m (80,180sq ft).

Acquired by the the Jesuits in 1858, the original Milltown Park and its period residence was adapted and extended to provide a novitiate followed by schools of Philosophy and Theology and later a community chapel, theatre and library. The Milltown Park community has been dedicated to the formation of Jesuits, for more than 160 years and, since the 1960s a dozen other religious congregations in theological and pastoral ministry. Since the 1960s these studies were expanded to include the education of lay people as part of a move towards greater lay involvement in church ministry. Both these areas have experienced a dramatic decline, and with falling vocations, the Jesuits, have decided like many other congregations, to close their large facilities and seek other options for training of priests.

With the departure of the clerical students most of the older Milltown buildings and adjoining land have become surplus to requirements and impossible to maintain by the Jesuit community. In the meantime the order has developed modern residential and administration accommodation to the rear including the new Milltown Park community house and Cherryfield Lodge nursing home.

The land belongs to the Milltown Charitable Trust. Subject to the approval of the charities regulator, the proceeds of the sale will be used for the support of various Jesuit works including social justice projects here and abroad, the education and faith development of lay people, and the care of the increasing number of sick and ageing Jesuits.

Further details on the property and feasibility study prepared by RKD Architects in advance of its sale are available from Jack Devlin and Patrick Kirwan at GVA Donal O’Buachalla.