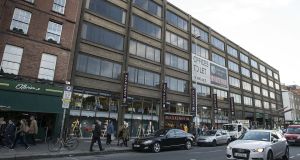 An Bord Pleanála has granted planning permission for a new €100 million office development on Nassau Street in Dublin in spite of the Kilkenny Group warning that the proposal would result in “serious consequences” and job losses for its flagship store.

The appeals board has approved the proposal by Larry Goodman’s family, which promises to create office space for 1,600 people, in spite of strong local opposition.

The Kilkenny Group operates its Kilkenny Shop and Design Centre within the proposed development site and led opposition against the proposal which was also opposed by Iput plc and Trinity Real Estates.

Consultants for the Kilkenny Group stated that the group has 304 employees nationally which rely on the viability of the flagship store on Nassau Street.

The 77-page Kilkenny Group appeal said the proposal did not address the severe impact of a continuous level of disruption on its store during the estimated three years of construction of the proposed development.

An Taisce, meanwhile, told the appeals board that “the scale and visibility of the proposed structure from such a site of such architectural heritage significance as Trinity College is inappropriate”.

However, the appeals board gave the plan the go-ahead after concluding that the eight-storey development would not detract from the visual amenities of the area or the character and setting of the adjoining protected structures or the Trinity Architectural Conservation Area.

Setanta Unlimited, which owns the site, lists beef baron Larry Goodman and his son Lawrence Goodman as directors. Lawrence Goodman heads up the family’s property interests as well as running his own property development business.

The existing office block is largely vacant and according to the applicants not suitable for modern office needs.

In his inspector’s report, Colin McBride found that the construction of the proposed development was likely to be disruptive to the existing operation of the Kilkenny Shop.

However, Mr McBride stated that he did not consider that it would prevent the continued operation of the existing retail unit and that appropriate construction management could minimise construction impact.

A spokesman said: “Ternary Ltd welcomes the granting of planning permission for the development at the Setanta Centre. The project will be delivered as outlined in the application.”

A spokesman for the Kilkenny Group said it was examining the board decision and did not have a comment to make at this time.

1 Ulster Bank to introduce new card payment controls on app
2 Hurrah for the companies giving staff more time off
3 RTÉ to seek 70 voluntary redundancies as ‘large costs’ beckon in 2021
4 Apple planning updates to its AirPods earbuds next year
5 Sustainable investment: How your pension can help tackle climate change
6 Aryzta to pursue asset sales as takeover talks fail
7 How much state pension will I get next year?
8 Start-up Loanitt raises €570,000 as it looks to double headcount
9 Policy failed us during the banking crisis and it’s failing us again
10 Some Irish money market funds came close to danger in March
Real news has value SUBSCRIBE