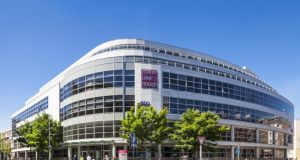 The Royal College of Surgeons in Ireland is to sell an office block at the back of the St Stephen’s Green shopping centre in Dublin.

The proceeds of the sale will be used to fund improvements at its city centre campus and to integrate it with the Ardilaun Centre, on St Stephen’s Green, which was previously occupied by Eircom.

DTZ Sherry FitzGerald will be quoting €57 million for the freehold interest in Beaux Lane House, a six-storey over basement building fronting on to Lower Mercer Street, where the main tenant is chartered accountants firm BDO.

BDO, the world’s fifth-largest accountancy firm, leases 59 per cent of the building on four floors on a 20-year lease from 2002. Other tenants in the 9,775sq m (105,217sq ft) block are Legal and General, Michael Page, Riot Games and Hartley & Marks.

The building is arranged around a central atrium allowing natural light to permeate through much of the block. It is fitted out to the highest specifications with access to the upper floors via two high-speed lifts.

Clive Roche of DTZ Sherry FitzGerald said significant interest from domestic and international investors was expected because of the potential to take advantage of the ongoing growth in office rents.

This is the second phase of the RCSI’s plans for the development of its St Stephen’s Green campus. The college recently laid the foundation stone for an €80 million education facility on nearby York Street.

RCSI chief executive Prof Cathal Kelly said that the reinvestment represents significant progress on the college’s journey to becoming a leading international health sciences institute with a global reputation for the education and training of healthcare professionals and researchers.