Impact of rent collection levels to date has been modest 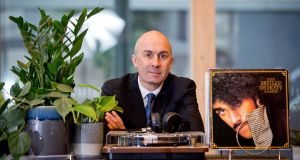 Hibernia Reit chief executive Kevin Nowlan says the full impact of Covid has yet to be felt in property values. Photograph: Tom Honan

Property values and commercial rent have yet to feel the full impact of the Covid-19 crisis, according to Hibernia Real Estate Investment Trust (Reit).

Hibernia said on Wednesday that the value of its properties rose 2 per cent to €1.465 billion in the 12 months ended March 31st, its last financial year

Profit after tax fell 50 per cent to €61.5 million from €123.5 million, partly due to a €22 million hit to Hibernia’s property values from the Budget 2020 increase in commercial property stamp duty to 7.5 per cent from 6 per cent.

Kevin Nowlan, Hibernia chief executive, said the full impact of Covid-19 on market rents and property values had yet to be felt.

The company develops offices mainly in central Dublin which it lets to Irish and multinational businesses. It acknowledged that the market’s short-term prospects were negative.

“The impact on our rent collection levels to date has been modest and we are working collaboratively with any tenants who are having difficulties,” Mr Nowlan said.

He added that Hibernia remained confident about the long-term prospects of the central Dublin office and housing markets.

Speaking after the company published results, Mr Nowlan suggested that a full recovery could take two to three years as it was likely to depend on the development of an effective coronavirus vaccine.

If the crisis persists, he argued that companies would focus more on managing their businesses through it than expanding. That could involve deciding whether or not to refit offices to allow for the 2m social distancing rule, he added.

Mr Nowlan was sceptical that the widespread shift from office to home working would result in long-term damage to the office market.

He pointed out that recent surveys of those working from home for the last two months showed a majority wanted a full or partial return to offices.

The property investor has collected 93.5 per cent of the rent due from commercial tenants for the three months ending in June. It has deferred 3.5 per cent, 2 per cent is due in June and there is 1 per cent outstanding.

Hibernia had net debt of €241.4 million at the end of March and €136 million in cash and undrawn credit.

Mr Nowlan warned that the stamp duty increase, a surprise announcement by Minister for Finance Paschal Donohoe in his October budget speech, could put outside investors off the Republic.

He pointed out that it was the second time in three budgets that the Government had increased the tax. Mr Donohoe doubled it to 6 per cent two years previously.

Mr Nowlan argued that it made investors nervous about the market here. “If it had stayed at 6 per cent, it would have been fine, but some investors fear that property is an easy target,” he said.

Hibernia recently let space in its 2 Cumberland Place office block to technology company 3M and in a building on Windmill Lane to online fashion store Zalando.

A slower rise in the value of its properties during the financial year also hit profits.

Reits include movements in the value of their properties when calculating profits and losses.

Hibernia intends paying shareholders a final dividend of 3 cent, bringing the total for the year to 4.75 cent, a 37.5 per cent increase on 2019.

1 Why are markets booming when a crash is on the way?
2 How much do Irish people earn? And what will Covid-19 do to our wages?
3 Could your old car be giving away all your secrets to its new owner?
4 Dunnes Stores trials online ordering from Cornelscourt outlet
5 Up to 400 jobs saved in Cavan as MML takes stake in CG Power Systems
6 Permission sought for €150m film and media campus in Wicklow
7 Covid-19: Publicans and restaurateurs row over calls for VAT cuts
8 Ryanair passenger traffic slumps 97% as shutdown restricts travel
9 Aryzta dissident shareholder group raises stake to over 20%
10 Irish travel-tech company Rove raises €450,000 in seed funding
Real news has value SUBSCRIBE